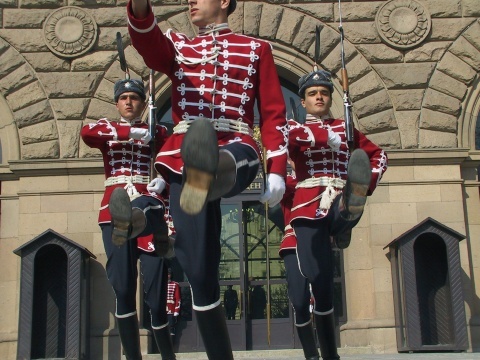 Bulgaria's National Guards Unit is one of the symbols of state power, along with the national flag, coat of arms and anthem. Photo by Sofia Photo Agency

Bulgaria marks Sunday its national holiday, known as Liberation Day, with solemn ceremonies and a number of events across the country.

On March 3 Bulgarians celebrate the end of the 1877-8 Russo-Turkish war, which led to the liberation of the country from a 5-century rule by the Ottoman Empire.

The ceremonial raising of the Bulgarian national colors begins at 11 am at the Monument of the Unknown Warrior before the Alexander Nevsky Cathedral.

A ceremonial change of the guard of honor in front of Bulgaria's presidency will be performed at noon sharp before the main entrance of the Presidential building.

The guards, who have turned into landmark with their red tunics trimmed in white and precise movements, always offer a nice attraction for both tourists and locals.

The National Guards Unit originates from the Life Guards of Prince Alexander I Battenberg, instituted in 1879. The first official escort of a Bulgarian monarch was performed on July 12, 1879. To commemorate this occasion, July 12 is marked as the official holiday of the National Guards Unit. Since its establishment, the Guards unit has been transformed from an escort of the Prince to a squadron, then to a regiment and, after 1942, to a battalion. At present it includes guard-of-honor elements and a ceremonial brass band.

In 2001 the National Guards Unit was endorsed as a representative military formation of the Bulgarian Armed Forces and is one of the symbols of state power, along with the national flag, coat of arms and anthem.

The ceremonial change of the guard of honor in front of the Administration of the President was performed for the first time on November 5, 2003.

The ceremonial show combines non-standard drill rests and foot movements with and without arms, as well as saluting the colors and the heroes who laid their lives for the freedom and independence of Bulgaria.

A concert of the army brass orchestra also begins at noon in the "Bulgaria" concert hall in downtown Sofia.

A military roll call and fireworks are scheduled for 6:30 pm before the building of the Parliament.

Thousands of Bulgarians will pay homage to the Shipka National Memorial.

The Shipka peak in the central Stara Planina mountain was site to some of the most fierce and pivotal battles in the Russo-Turkish war.

Military ceremonies will be held on Shipka as well and in the cities of Pleven, Plovdiv, Yambol, Smolyan, Ruse and Blagoevgrad and the towns of Kazanlak and Gorna Oryahovitsa.

Navy units will participate in celebrations in the cities of Varna, Dobrich and Burgas and the towns of Sozopol, Chernomorets, and Sredets.

Ceremonies, salutes, concerts, sports events, and laying of wreaths and flowers will be held in all major cities and in many towns across the country.