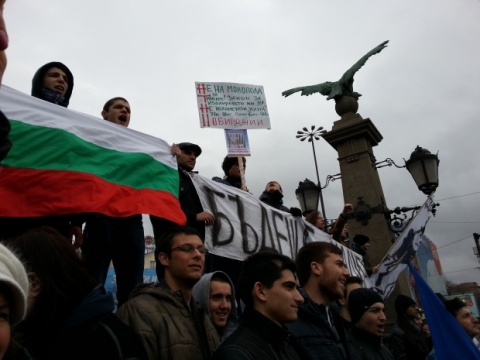 About 50 young people have have gathered Tuesday evening for a protest rally at the key Eagles Bridge intersection in the Bulgarian capital Sofia. Photo by BGNES

Citizens have gathered Tuesday for a protest rally for the 17th consecutive evening at the key Eagles Bridge intersection in the Bulgarian capital Sofia.

Bulgarians have been staging unprecedented since 1997 protest rallies against unbearable utility bills, monopolies, and wide-spread poverty that turned into a civil unrest against the political model of ruling the country.

The protests led to the resignation of the government of the Prime Minister, Boyko Borisov, and his ruling Citizens for European Development of Bulgaria party, GERB.

Tuesday evening, about 50 people, mostly youth, carrying flags and blowing whistles marched from Eagles Bridge towards the Parliament, temporarily blocking traffic. They left trash bags there, to symbolically collect the garbage inside the building and continued to the Office of the President.

They say the Tuesday evening protest is also in support of the three people who set themselves on fire in less than a week.

Eco activists have called a rally in downtown Sofia as well against plans of the outgoing Minister of Environment and Waters, Nona Karadzhova, to approve new construction of ski facilities in the Pirin Mountain.

It emerged meanwhile that the Bansko municipality in Pirin was not going to submit Wednesday the procedure to change the environmental regime in the Pirin National Park, citing lack of adequate time to prepare it.

The organizers of the eco rally announced they will be joined by those opposing the privatization of the State-owned railway company BDZ, as notorious banker Tseko Minev as one of the bidders for BDZ is deemed to be the person behind it, as well as the owner of the company wishing to build in Pirin.

About 500 people are rallying in the Black Sea city of Varna Tuesday evening as well. They reached the building of the power utility Energo-Pro where they were met by riot police guarding it and are now in front of the City Hall building.

In addition to the other demands, people in Varna are asking for the resignation of 4th-term Mayor, Kirl Yordanov. Yordanov was reelected in 2011 on the ballot of GERB and is believed to have been serving the interests of the powerful local shady group TIM.