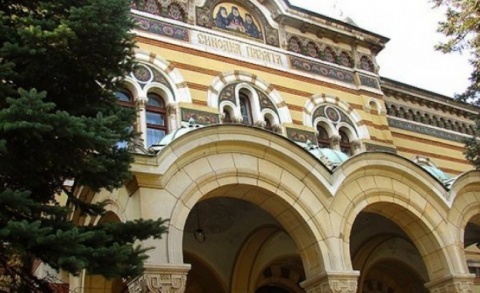 Bulgaria's Holy Synod is holding Sunday a historic election of a new Patriarch of the Orthodox Church. File photo

The new Patriarch of the Bulgarian Orthodox Church is going to be elected Sunday by the Holy Synod at a national church council.

The election is historic for Bulgaria as the last one happened 42 years ago, on July 4, 1971.

The Church removed the mourning flag last weekend after the names of the three candidates emerged.

They were chosen after prolonged debates and stalemates last weekend and they are: the Stara Zagora metropolitan Galaktion, Ruse's Neofit, and Lovech's Gavriil.

Galaktion was elected last Saturday with 10 votes, while the other two were elected with 9 votes on Sunday. The members of the Holy Synod decided then that 9 votes, instead of the required 10 (or 2/3rd of the vote), would be sufficient to make the cut as the election faced a failure since they could not reach consensus.

It was reported that Galaktion is seriously ill with pneumonia, and is not going to attend the council. The Metropolitan of Western and Central Europe, Simeon, is also ill and will not attend as well.

At 8 am all 138 delegates entered the conference hall of the Bulgarian Academy of Sciences, BAS, headquarters in downtown Sofia, near the Parliament. They are now in the building of the Holy Synod. The voting urn was already sealed, slightly after 9 am. The results are expected to be announced around noon.

The delegates must write the name of their favorite on a white ballot. To be elected Patriarch, a candidate must collect two thirds of the votes (92).

The Bulgarian Orthodox Church has more than 40 guests from abroad, such as the Bishop of Cyprus, Hristozom II, and the Bishop of Prague, of the Czech and Slovak lands Christopher, the official site of the Holy Synod announced.

After the conclusion of the election, a solemn procession from the Holy Synod building to the Alexander Nevsky cathedral will take place. There will be a cordon of representatives of all military divisions of Bulgaria.

Due to the event many streets in downtown Sofia, in the vicinity of the Alexander Nevsky cathedral, will be closed for traffic and parking, the Sofia City Hall announced.

A rift among the Bishops shook the Holy Synod after Patriarch Maxim passed away.

Meanwhile, a claim was filed with the Supreme Administrative Court, VAS, against the election of the three Bishops to run for Patriarch. VAS refused to examine it on grounds of separation of Church and State.

The four were Nikolay, Amvrosiy, Gavriil, and late Patriarch Maxim.

Gavriil was quoted saying the fact he does not have a DS file might have given him an advantage in the bid to become the new Bulgarian Patriarch.