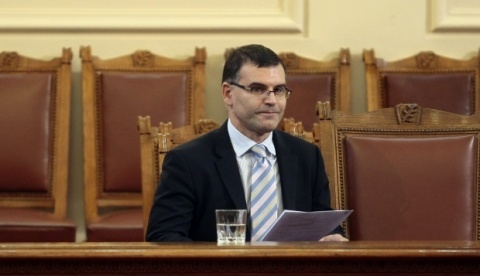 Outgoing Finance Minister Simeon Djankov, whose resignation was announced Monday, declined to comment on the decision of Prime Minister Boyko Borisov to resign.

Djankov was approached by reporters as he entered the building of the Council of Ministers Wednesday, minutes after Borisov announced his latest plans.

Tomislav Donchev, Minister for the Management of EU Funds, who was also nominated by the PM to take over Djankov's job, said: "It's not our fault; this is the sole responsible approach to the crisis in the country at the moment."

On Wednesday, the Parliament had to vote the proposal to accept Djankov's resignation and appoint Regional Minister, Lilyana Pavlova, as Deputy Prime Minister and Tomislav Donchev as Finance Minister.

Djankov's resignation came as a stunning surprise to many in Bulgaria since he was considered one of the key ministers in the government of the Citizens for European Development of Bulgaria party, GERB, and a favorite of Borisov, who constantly gave him high marks for maintaining strong fiscal discipline.

It was reported Monday that Djankov is in the US to spent time with his wife and children, who live there.