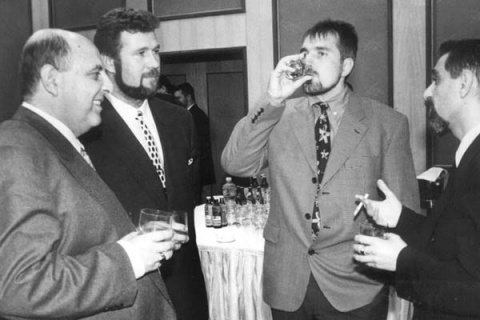 A picture from Capital weekly of the first anniversary of SIK Insurance Company in 1995 – from left to right: Ventsislav Stefanov, Roumen Nikolov The Pasha, and Boyko Borisov.

A man close to a former business partner of Prime Minister, Boyko Borisov, has been a member of the Managing Board of the Czech-owned power utility CEZ since 2009.

The Managing Board of CEZ Bulgaria consults and manages the company's Bulgarian operations.

When approached by the Bulgarian Sega daily, the Ministry of Economy and Energy has responded that the said individual – Dimitar Nikolov Stefanov AKA Mitko the Karate Man - has been appointed at CEZ Bulgaria in October 2009, directly from the company's headquarters in Prague.

According to the Ministry, Stefanov was not hired by them and is not representing the State since it does not own stakes in CEZ.

In addition, the site for investigative journalism Bivol.bg published an article listing the "Karate Man's" salary at the huge for Bulgaria amount of BGN 35 000 per month, without anyone knowing his exact duties with CEZ.

Bivol have further revealed that while Stefanov has been working for CEZ, he has also represented a company of notorious "shady" businessman Rumen Nikolov AKA The Pasha, heavily involved in the 90s of the 20th century with one of the two top criminal groups – SIK.

Also in the 90s, Borisov has been a partner with The Pasha in a company named Budoinvest. Before he became Prime Minister, Borisov has openly admitted still being friends with Rumen Nikolov.

Stefanov's education level is not known, but it is known that he has been a driver of The Pasha. After Borisov's ruling Citizens for European Development of Bulgaria party, GERB, took office, he worked briefly as an advisor to a GERB Member of the Parliament.