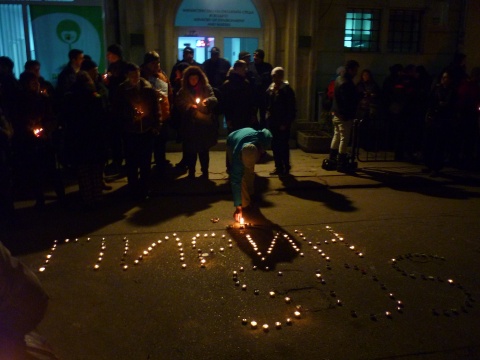 Protesters have arranged candles to write "SOS Pirin" in front of the Ministry of Enviornment in Sofia. Photo by ZaVitosha

Scores of Bulgarian citizens have gathered with candles in front of the Ministry of Environment in Sofia Monday evening to show their concern over possible development in the Pirin National Park.

Tuesday the ministry will consider a petition by residents of Bansko, Bulgaria's top winter resort, for an expansion of ski facilities and hotels in the area of the national park.

The proposals will touch close to 65% of the park's area, say environmentalists, who believe that Bansko is already overdeveloped.

Citizens have been long critical of wanton construction in Bansko and the illicit practices of local ski operator Yulen, which has been found to use considerably more land in the protected area than allowed by the government.

Top Bulgarian politicians and persons of state from the ruling GERB party have not hidden their sympathies for the expansion of facilities in Bansko.

At the same time as the vigil Monday, thousands gathered in the center of Sofia to protest ongoing economic stagnation in the country and to call for the resignation of Bulgarian PM Boyko Borisov.

Protesters have raised slogans against high prices, low wages, and a perception of implication of those in power with murky economic structures.

Environmentally-concerned citizens have been long drawing attention to Borisov's close relations with Tseko Minev, president of the Bulgarian Ski Federation, who is known to control First Investment Bank, as well as ski operators Yulen and Vitosha Ski.