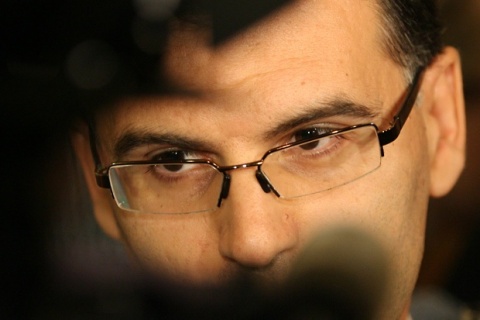 Ousted Bulgarian Deputy Prime Minister and Finance Minister, Simeon Djankov, was known as the member of the Cabinet stirring the strongest conflicts. Photo by BGNES

The official grounds for the ousting of Bulgarian Deputy Prime Minister and Finance Minister, Simeon Djankov, is his decision to delay with up to two months the payment of subsidies to grain producers.

On February 8th, the Finance Minister declared that the only options in the budget to pay the subsidies were mid-March and the rest at the beginning of April, "despite any possible protests."

In the aftermath, the grain producers threatened to stage large-scale rallies in downtown Sofia.

Borisov, who is known to hate protests, promised them the money will be received by February 22. He has met with Deputy Finance Minister, Vladislav Goranov, Agriculture Minister, Miroslav Naydenov, and representatives of grain producers' associations, where he pledged the funds will be secured or Djankov will be let go.

Simeon Djanov held the post since the government of Borisov's Citizens for European Development of Bulgaria party, GERB, took office in the summer of 2009.

Before being invited by Borisov to take over the country's finances, he worked as economist at the office of the World Bank in Washington DC.

It was reported then that during conversations between the two, Djankov impressed Borisov with his "original proposals to rescue Bulgaria from the financial crisis."

The Monday news about the ousting stunned many Bulgarians as Djankov was one of the favorite ministers of Borisov and enjoyed his firm support. The PM often praised him locally and across Europe for maintaining strong fiscal discipline.

Djankov was also known as the Minister stirring the strongest conflicts and triggering demands for his resignation by the opposition, the business, healthcare professionals, scientists and researchers from the Bulgarian Academy of Sciences, BAS.

At the end of 2011, Borisov threatened Djankov with dismissal over his statements for the media that the Agriculture Minister was the most difficult one to work with.

The first conflict erupted when the Minister labeled BAS people "old feudal lords." He later created a scandal with now-former President, Georgi Parvanov, by calling him a "young billionaire" and cutting the budget of the Presidential Office.

Djankov also stirred a conflict with the other Deputy PM, Interior Minister, Tsvetan Tsvetanov, over leaked wiretaps of conversations between Borisov and the Customs Agency Chief; he told the opposition in the Parliament they could not vote because they were "drunk;" outraged retirees and mothers by refusing to update the money they receive, and caused wide-spread indignation by imposing interest rate on bank deposits.

The resignation also came after large-scale protest rallies against high electricity and heating bills took place across Bulgaria Sunday, with hundreds of thousands of outraged citizens taking on the streets.

The reshuffle happens just months before the general election and in the aftermath of an unseen so far number of other such dismissals and replacements.

According to BNR, Djankov is not in the country at the moment.

Regional Minister, Lilyana Pavlova, who is the highest rated minister in the Cabinet Borisov, is to take over the Deputy PM duties, while the Minister for the Management of EU Funds, Tomislav Donchev, is to be elected Finance Minister.

Pavlova is to keep the Regional Minister post and Donchev will hold two jobs.

His resignation brings the total of the ministerial reshuffles in the GERB Cabinet to 14, 9 of whom have been dismissed.