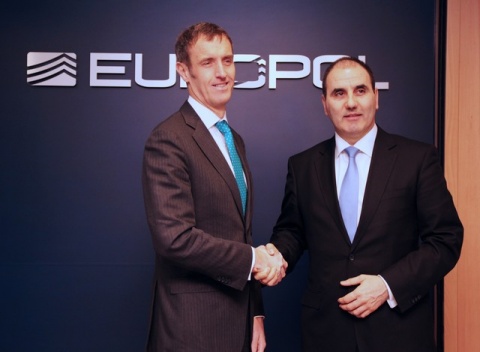 Tuesday Tsvetanov met Europol head Rob Wainwright to inform him of the progress of the Burgas bombing probe. Photo by the Bulgarian Ministry of Interior.

Bulgarian Minister of Interior Tsvetan Tsvetanov has yet again reiterated his belief that two of the attackers of the July 2012 bombing in Bulgaria are part of Hezbollah.

"The Burgas bombers were maintaining part of Hezbollah's structures in Canada and Australia and had conacts with other representatives of this organization," said Tsvetanov in an interview for TV7 Friday.

The Bulgarian Interior Minister first announced he had "grounded reasons to believe" that "Hezbollah's military wing" is involved in the Burgas bus bombing on February 5, stirring international controversy.

Saturday Hezbollah leader Hassan Nasrallah will give an important speech, which is also expected to include a statement on the bombing.

While Hezbollah has consistently denied taking part in the bombing, Israel has officially blamed the organization for the attack right after it was carried out on July 18, 2012.

Friday Bulgarian Interior Minister Tsvetanov stressed that the revealing of the Hezbollah link has not been done under outside pressure.

"There was no pressure whatsoever, from the US or elsewhere," said he.

According to Tsvetanov, investigators now know the real names of the attackers and are tracking their movements through Europe.

Two of them are believed to be dual Canadian-Lebanese and Australian-Lebanese citizisens.

"Our hypothesis is that the two were fellow engineering students in Lebanon where they were preparing the terror attack," said Tsvetanov.

According to him, they entered the EU using their real names, but moved in Bulgaria using fake IDs.