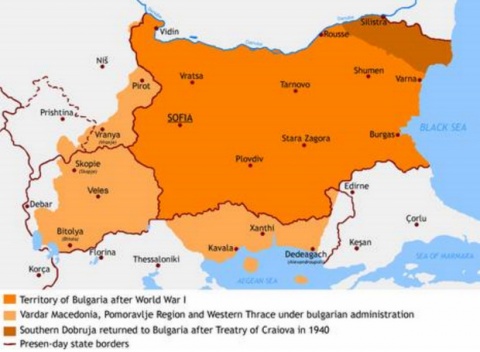 Bulgaria and the neighboring Bulgarian-populated territories of Thrace, Macedonia, and the Western Outlands under Bulgarian administration in 1941-1944. Map from wapedia.mobi

The Bulgarian government must assume the moral responsibility for the Nazi death camp deportation of ethnic Jews from the regions of Thrace and Macedonia regardless of the fact that Bulgaria saved its almost 50 000 Jews, according to Shalom, the major NGO of Jews in Bulgaria.

As in March 2013, Bulgaria and Israel are preparing to mark the 70th anniversary since the rescue of the 50 000 Jews with Bulgarian citizenship who were not deported to Nazi death camps in 1943 regardless of the fact that Bulgaria was allied to Nazi Germany, Shalom published a statement Thursday on the fate of the some 11 000 Jews from the Balkan territories under Bulgarian administration during World War II.

"The deporting of the Jews from Aegean Thrace, Vardar Macedonia, and the town of Pirot during World War II is a historical fact that cannot be rejected. We, the Bulgarian Jews, mourn the innocent victims, and honor their memory," states the Organization of Bulgarian Jews "Shalom".

Its statement makes it clear that its position was adopted by Shalom's executive bureau at a meeting on January 31, 2013.

Shalom does state, however, that "the historical facts about the fate of the Jews during World War II in Bulgaria and the territories administered by the Bulgarian pro-Nazi government cannot be used for anti-Bulgarian propaganda today and in the future."

After it became a "reluctant" ally of Nazi Germany in March 1941, Bulgaria was granted the right to administer Bulgarian-populated territories in Northern Greece (in the regions of Thrace and Macedonia), and in the south and east of the then Kingdom of Yugoslavia (in the regions of Macedonia and the Western Outlands).

Bulgarian historians have noted that Bulgaria's Tsar Boris III at the time had no way of saving these Jews as when Germany granted control to Bulgaria of the respective occupied territories, it was only ethnic Bulgarians who were granted Bulgarian citizenship – unlike the situation of the Jews in Bulgaria proper who already had Bulgarian citizenship.

The deportation of Jews from Macedonia and Thrace with the participation of Bulgarian authorities in 1941-1943 has recently been used in a wide-ranging anti-Bulgarian propaganda campaign by the authorities of the former Yugoslav republic of Macedonia whose government seeks to seal the dissociation of the Macedonians from the Bulgarian nation regardless of the common history and ethnicity shared before 1944.