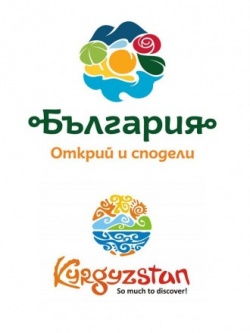 Bulgaria's already controversial new logo designed to promote travel to the country has been found to resemble the counterpart emblem recently developed by Kyrgyzstan.

The two logos, displayed above, have the same overall shape and display very similar interplays of colors.

The internal designs of the Kyrgyzstan logo are intended to represent sun, open water, mountains, sand and green vegetation, something also present in the Bulgarian emblem.

The Kygrgyz emblem exclaims "So much to discover!", while the Bulgarian version calls "Discover and share!"

The Bulgarian logo, part of the so-called 'Brand Bulgaria' campaign, stirred controversy when unveiled in January, with critics slamming its alleged conceptual and artistic poverty.

It became public that Bulgaria's Ministry of Economy, Energy and Tourism had paid BGN 1.4 M to the team who developed the concept and imagery of the campaign.

The procedure for granting the deal has now landed in the prosecutor's office for a check of possible breaches of regulation.