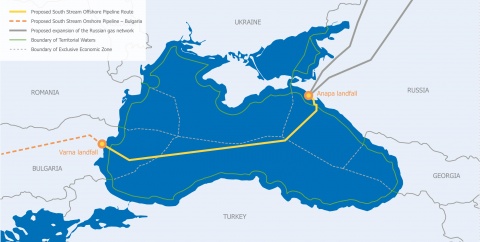 Route of the South Stream pipeline in Bulgaria. Map from south-stream-offshore.com

A company statement clarified that the end of the underwater section of the Russian-sponsored pipeline will end on the Bulgarian Black Sea coast, and the starting point of the land section will be located several kilometers away from the Galata quarter in Bulgaria's Varna.

The transition from the underwater to the land section of south stream will be made with a horizontal drilling so the pipeline will not be technically visible on the surface even during the construction phase, the company said.

It added that the same location already hosts a gas pipeline transiting natural gas from Bulgaria's Black Sea deposits, which has not interfered with local life, business, tourism, or nature in any way.

Under Bulgarian legislation, the distance between the gas pipeline and the closest inhabited building must be at least 120 meters.

The South Stream company explained that its pipeline will emerge on the Bulgarian Black Sea coast at a location 4.5 km away from the Galata quarter, more than 20 km away from downtown Varna, and 8 km from Varna's Asparukh Bridge.

"It is also important to note that the South Stream pipeline will be delivering natural gas, not oil or oil derivatives. Natural gas is the most environment-friendly fuel known in the world, which, in a combination with the hi-tech solution for transferring the pipe onto the land through a horizontal drilling cannot be any matter of concern on part of the environmental organization, the tourism business, or the people living in the area," the South Stream company alleged Wednesday.

The South Stream pipeline is intended to transport up to 63 billion cubic meters of natural gas to central and southern Europe, diversifying Russian gas routes away from transit countries such as Ukraine. Construction started in December 2012 in Russia.

The Black Sea underwater section of South Stream between Russia and Bulgaria will be 900 km long, and will be constructed at a maximum depth of 2 km.

The pipeline's core shareholders include Gazprom with 50%, Italy's Eni with 20% and Germany's Wintershall Holding and France's EDF with 15% each.