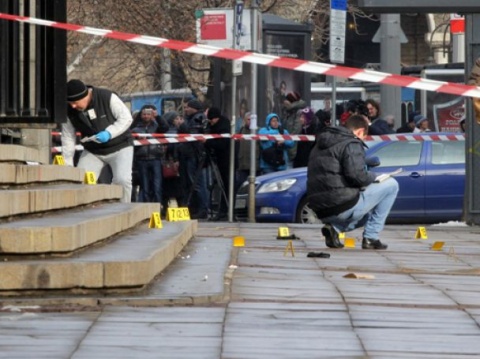 The entrance of the Central Court building in Bulgaria's capital became a crime scene after the shooting at convicted Bulgarian mobster Zlatomir Ivanov Baretata. Photo by BGNES

A Kalashnikov machinegun has been found after the police searched the premises of the apartment from where a top Bulgarian mobster was shot at Tuesday.

Bulgarian top crime boss, Zlatomir Ivanov aka Baretata (The Beret, The Barret) was shot around 9:30 am in the vicinity of the Central Court building in the Bulgarian capital as he was going there for an appeals hearing in an illegal drugs distribution case against him.

It is presumed the shots came from a rooftop apartment across the street from the main courtroom building in downtown Sofia. The assailants then set the apartment on fire to cover up clues and evidence.

In addition to the A.K.A. Kalashnikov with a telescopic sight and a silencer, the police also found many bullet casings, and other unspecified evidence.

On the day of the shooting, police experts said the weapon has been either a small-caliber rifle with a telescopic sight, without a silencer, or a Kalashnikov with telescopic sight.

The investigation has also located an inhabited apartment with a direct view of the side entrance of the Court building on "Positano" street. All buildings on the same street have been checked.

In the aftermath of the shooting, one of the codefendants in the case, Valentin Lukov, told reporters that Baretata usually came in the Court building from the side entrances, not from the central one where he was shot.

Lukov said he thought Baretata used the central entrance because he had been running late for the hearing and access through the side doors is usually slower.

The defendant informed he heard the shots, turned around, saw Ivanov fallen by the door and managed to pull him inside. Baretata had uttered: "I am fine."

The police further reported Wednesday that Baretata arrived for the hearing in a Mercedes with Sliven license plates, while the black SUV, which was believed to have been the vehicle transporting him, had been parked there by bodyguards to divert attention.

Ivanov underwent surgery for approximately four hours on Tuesday and his life was reported to still be in danger, but there have been no updates on Wednesday.

Doctors at the emergency Pirogov hospital have declined offering details.