Can a No-Name U.S. Company Save Bulgaria's Struggling Nuclear Plant? 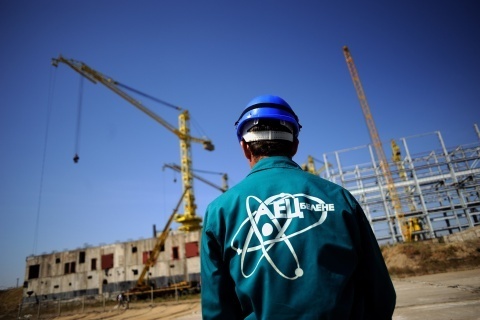 A languishing Cold War saga surrounding an abandoned nuclear plant in Bulgaria is coming to life again, and this time around, its players include an obscure U.S. power company in the middle of an energy-centered standoff between the United States and Russia.

On Sunday, Bulgarians went to the polls to decide the fate of the nuclear power plant at Belene, a town of 10,000 on the Danube, which many locals say has been held hostage to geopolitics in this southeastern European country, and one of the newest EU members. With 70 percent of the vote now in, the Central Elections Commission announced Monday that support for the plant had topped 60 percent.

And even though voters chose to revive the plant, the referendum is unlikely to settle questions over the facility's opaque financing or Bulgaria's energy future.

The plant was initially designed in the 1970s by Russian engineers, and some of the installations were built with Soviet backing in the 1980s.

With the unraveling of the Eastern bloc in 1989, however, the project was abandoned for more than a decade, ostensibly due to a lack of money, although many Bulgarians blame the regional energy competition between Bulgaria, Romania, Turkey, Greece, and several former-Yugoslavia countries backed by the geopolitical interests of Western powers.

"France, which took the lead in Europe after Germany became preoccupied with its unification, threw its weight behind the rival Romanian Cernavoda project," says Veselin Avramov, an independent political analyst in Bulgaria. "This was a considerable blow to Belene and the Bulgarian nuclear program."

The first unit of Cernavoda opened in 1996, or roughly at the same time when Belene was originally scheduled to become operational.

The public debate over whether Belene should be completed resurfaced in the early 2000s when Bulgaria bowed to European and international pressure over safety concerns and agreed to close down its oldest four nuclear reactors at the nearby Kozlodui plant. Many Bulgarians saw the closures as a blow to national pride and to the country's energy independence.

Before the shutdown of the first two units in 2002, the combined output of the four reactors accounted for some 20 percent of Bulgaria's annual electricity production, and made up the lion's share of Bulgarian energy exports to the region. Belene would compensate for this drop in output, supporters of the proposed plant say.

Still, to many Bulgarians, Belene remains a problematic conduit for Russian influence. Pro-Western forces on the political right oppose the project on grounds that it would increase Sofia's dependence on Russian technology. Bulgaria already imports more than 90 percent of its natural gas from Russia, and Russian firms own the only Bulgarian oil refinery.

Meanwhile, the Bulgarian Socialist Party, a successor to the Communist Party and widely perceived as pro-Russian, has been Belene's main supporter.

In 2006, Bulgaria's Socialist party prime minister, Sergei Stanishev, signed a contract designating the Russian firm Atomexportstroy as the builder. The current center-right government of Prime Minister Boiko Borisov attempted to scrap the deal in early 2012, resulting in the Russian firm filing a €1-billion lawsuit against Bulgaria to pay for parts already ordered.

Over the summer of 2012, the Socialist party collected more than 500,000 signatures in support of the plant, forcing Sunday's referendum on the issue.

In recent years, U.S. companies including Chevron have pushed for developing other sources of energy to create an alternative to the Belene nuclear project, mainly in the form of natural gas extracted by hydraulic fracturing, or fracking.

Still, the proposal has been highly controversial given fracking's potential for environmental damage and the location of underground deposits of natural gas beneath prime agricultural land. A number of protests against fracking took place in 2010 and 2011, and in January 2012, parliament banned such explorations, against the advice of the United States ambassador in Bulgaria.

In June, as a result of intensive lobbying, parts of the ban were lifted, and many Bulgarians believe that eventually it will be withdrawn.

Belene, by contrast, is considered relatively safe. Despite warnings by environmental groups that the plant would be situated in a quake-prone zone, several inspections by the International Atomic Energy Agency have concluded that its designs feature advanced safety mechanisms with multiple redundancies which would protect it against accidents ranging from powerful earthquakes to airplane crashes.

The current debate focuses primarily on financial concerns. The total costs of the Belene project have proved elusive, with estimates ranging between €4 billion and €10 billion. Several major potential investors -- including the German corporation RWE -- have withdrawn in the last five years, and Borisov cited low profitability as well as the impact of the financial crisis in his decision to shelve it.

Even so, a new investor appeared several months ago: the U.S.-registered Global Power Consortium.

Little is known about the company, but with no prior experience with nuclear power plants, little registered investment capital and no Internet presence of its own, some say Global Power Consortium fits the profile of a straw company.

"At the very least we are talking about a company which clearly lacks the capacity to manage large-scale projects," says Ruslan Stefanov, an analyst at the Sofia-based Center for the Study of Democracy.

A report in the Bulgarian daily Dnevnik revealed that Arun Savkur -- one of the main partners and representatives of the consortium -- was fined €300,000 for a market manipulation attempt in Italy in 2007.

The consortium's two Bulgarian consultants have also attracted negative media attention. One is Bogomil Manchev, the owner of the private firm Risk Engineering Ltd, who was characterized in a leaked U.S. diplomatic cable dated February 17, 2009, as a "notorious Bulgarian energy oligarch."

Another is financier Emil Hursev, who was accused of siphoning off funds from Mineralbank in the 1990s but was acquitted after a prolonged trial in Bulgaria.

Former Bulgarian Prime Minister Ivan Kostov, an outspoken critic of Moscow's policies, has accused the U.S.-based prospective investor of being a front for Russian interests.

"This [investor] looks like it has nothing to do with the U.S.," Kostov said in an interview with the television network BTV in September. "[Behind it] is Russia. It goes without saying that these are the Russian builders of the nuclear reactor. This is the Russian government."

After repeated attempts to reach the representatives of Global Power Consortium for a comment, only a succinct emailed response arrived: "The information in your referenced news media reports are inaccurate."

Nevertheless, after several debates in the Bulgarian parliament, the prime minister made a partial about-face in his decision to cancel the Belene project, and negotiations with Consortium are scheduled to proceed.

"Global Power Consortium is a way for both Borisov and the Russians to back out of their confrontation," says Avramov. "Borisov can use the offer as a ladder to climb down from his rhetoric, and the Russians will be able to avoid the appearance of offering to finance the project directly. It is yet another opaque chapter of the Bulgarian energy drama, and it is clear that major decisions are being made without consulting the Bulgarian public."

Meanwhile, while most Bulgarians backed the building of the plant the turnout barely exceeded 20 percent. Since fewer people voted now than showed up at the last parliamentary elections (turnout was around 60 percent then), the results are not valid according to Bulgarian law.

Still, Borisov, a populist politician, would find it hard to completely ignore the popular vote - even more so during the run-up to another parliamentary election this year. The offer of foreign financing could help change his mind.

Borisov has already floated an alternate proposal to use the Russian equipment purchased by his predecessor in order to build a new unit at the Kozlodui plant, while many say that a new debate over fracking and natural-gas development is likely to take place after the elections this summer.

Analysts say that Belene is likely to remain in limbo for some time to come. That's because it would be very difficult to find a legitimate international or domestic investor.

"[There are] astonishing levels of corruption and incompetence when it comes to the project's execution -- it's become a political football," said Kash Burchett, an energy analyst at the London-based IHS. "In terms of the future for Belene, there is so much political baggage that there is no way you will find a European utility that would go near it. Given the utilities' focus on deleveraging and their aversion to capital intensive projects with long payback times, it is unlikely that the project will move forward in the next 10 years."

"With EU-backed modernization of the Bulgarian economy, the energy demand per unit of GDP will decrease further," said Stefanov. "Moreover, the state-owned energy companies have little capacity to invest and even less to manage projects of the Belene size."