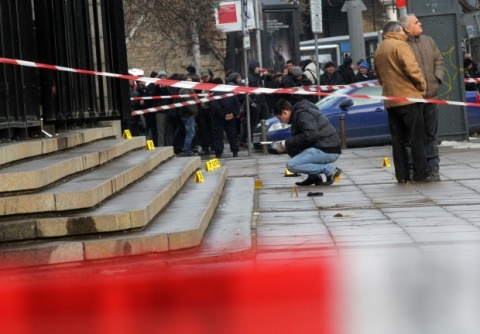 The entrance of the Central Court building in Bulgaria's capital became a crime scene after the shooting at convicted Bulgarian mobster Zlatomir Ivanov Baretata. Photo by BGNES

Two teams of sharpshooters have been waiting to shoot at Bulgarian top crime boss, Zlatomir Ivanov aka Baretata (The Beret, The Barret).

Baretata was shot around 9:30 am in the vicinity of the Central Court building in the Bulgarian capital as he was going there for a hearing in an illegal drugs distribution case against him.

In the aftermath, one of his codefendants, Valentin Lukov, told reporters that Baretata usually came in the Court building from the side entrances, not from the central one where he was shot Tuesday.

The trial was cancelled along with several others.

Lukov said he thought Baretata used the central entrance because he had been running late for the hearing and access through the side doors is usually slower.

The defendant informed he heard the shots, turned around, saw Ivanov fallen by the door and managed to pull him inside. Baretata had uttered: "I am fine."

Lukov confirmed earlier statements of Baretata's lawyer that no death threats have been issued against her client.

"Such a stupid story; there are crazy people," said he.

When asked if the plot could have been masterminded by another notorious mobster, Dimitar Vuchev AKA Dembi, Lukov explained they were on trial precisely because of Dembi's testimony.

The eyewitness also stated Baretata has a legal security business, adding he did not believe this could be the reason for the attack.