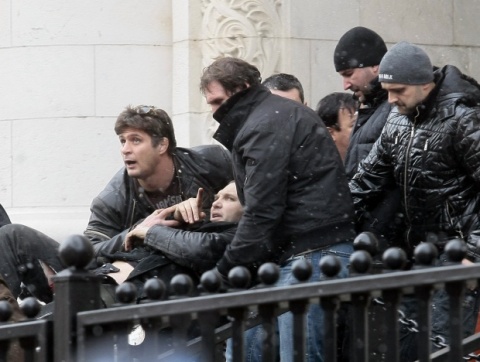 Convicted Bulgarian mobster Zlatomir Ivanov Baretata was shot in the leg in the very heart of the Bulgarian hospital. Photo by BGNES

Bulgarian top crime boss, Zlatomir Ivanov aka Baretata (The Beret, The Barret), who was shot in broad daylight in downtown Sofia, has four gunshot wounds.

The information was reported by the Bulgarian National Radio, BNR, citing the Deputy Chief of the Sofia police.

Unnamed insider sources of the radio station have told its reporter at the crime scene that the gun used has been a sniper one. The police had not yet identified the shooter(s) and the gun.

According to BNR, Baretata has leg and arm wounds, while the guard has been shot only in the leg.

The news agency Vesti.bg, however, cites the Director of the Sofia Emergency "Pirogov" hospital saying Ivanov was shot with two bullets and one hit him in the leg, the other in the kidney.

Both, Baretata and the bodyguard are in the shock room of the hospital, but their lives are out of danger.

Baretata was shot around 9:30 am Tuesday in the vicinity of the Central Court building in the Bulgarian capital as he was going there for a hearing in an illegal drugs distribution case against him.

After being hit by the bullets, Ivanov was able to make a few steps, leaving blood spots on the stairs of the building, according to eyewitnesses. The bodyguard has also fired several rounds. His gun has been seized by the police.

BNR reports the shooting started as Baretata and the bodyguard were walking up the steps. The shots came from an apartment on the top floor of the building across the street, after which it has been set on fire. According to other reports, there is no officially established connection between the shooting and the fire.

Firefighters are still extinguishing it, and after that police will start searching the premises.

People living nearby have told reporters that the building has 5 entrances, 2 of them in the back, and anyone can escape unnoticed.

The building houses apartments, law offices, and stores. Some say the apartment where the shots came from has been occupied by squatters lately.

The entire area near the Central Court is sealed by police, including for automobile traffic.