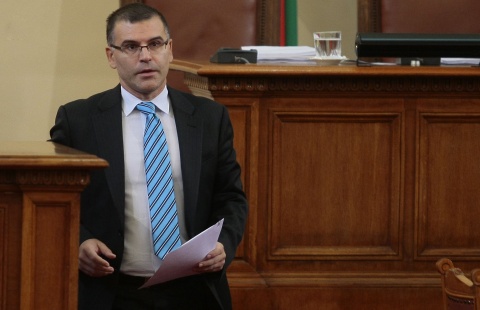 Bulgaria's next referendum should be on an important environmental topic, according to Finance Minister and Deputy Prime Minister Simeon Djankov. Photo by BGNES

Bulgaria's next referendum should be on an important environmental topic, according to Finance Minister Simeon Djankov.

In a Monday interview for Nova TV, he suggested that the next referendum could involve the statute of the Bulgarian Black Sea coast.

Djankov informed that he had abstained from voting at the January 27 nuclear referendum because the issue required expert knowledge and could not be sold through a plebiscite.

He claimed that the only good thing about Sunday's referendum had been its excellent level of organizations, adding that Bulgaria had actually held a superfluous first democratic referendum.

"To me, yesterday's question was "Would you like Bulgaria to go bankrupt?" Djankov stated, as cited by dnevnik.bg.

Citing Prime Minister Boyko Borisov, Djankov reminded that if the question about the construction of the Belene NPP was returned to Parliament, ruling center-right party GERB would once again vote against.

Bulgaria's Finance Minister declared Sunday's nuclear referendum as a failure of socialist leader Sergey Stanishev and "the nuclear lobby" around him due to the low turnout.

He emphasized that the leader of the pro-Belene Bulgarian Socialist Party (BSP) Sergey Stanishev had been demonstrated that he could count on the support of 7% of the people.

Djankov predicted that the energy and media lobbies inside BSP would resort to infighting.

According to preliminary results, a total of 60.55% of all Bulgarians who took part in Sunday's nationwide referendum voted in favor of the construction of a new nuclear power plant in the country.

With 97.14% of the votes counted, it emerged early on Monday that a total of 832 742 people had backed the potential construction of a new nuclear power plant, while 522 927 had voted against.

The referendum was invalidated by low turnout, as merely 21% of the eligible voters cast ballots .

A total of 4 345 450 people were supposed to cast a ballot in order for the decision of the voters to be binding.

As the turnout is over 20%, and more than half of the votes are positive, the question is to be returned to Parliament for further discussion.

Bulgaria will "logically" go for building a seventh reactor at its existing NPP in Kozloduy, Bulgarian Economy Minister Delyan Dobrev commented Sunday on the results of the nation's referendum.