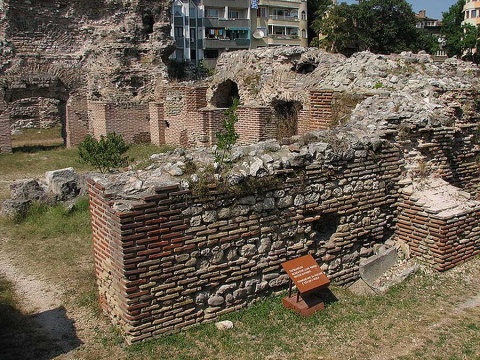 The Roman Baths are one of the most valuable monuments of culture in Bulgaria's Black Sea city of Varna. Photo by historvius.com

Bulgarian Deputy Prime Minister and Finance Minister, Simeon Djankov, has pledged the significant amount of BGN 3 M for restoration and conservation of the historical Roman Baths in the Black Sea city of Varna.

The sum came as a pleasant surprise to archaeologists who have asked for BGN 200 000.

Djankov made the pledge during a discussion organized by the Bulgarian Standard daily in Varna in the frame of the newspaper's campaign "The Miracles of Bulgaria."

The Minister stated the idea to provide significant funds under the Via Pontica program was not to give more money for archaeological research, but to make existing archaeological sites more attractive in order to boost tourism. He called on archaeologists to be creative in inventing names and stories around their discoveries.

The program is named after the Via Pontica bird migration flyway.

Djankov noted the Roman Baths are located in the very heart of Bulgaria's Black Sea capital and are a great tourist attraction, thus the goal would be to make them even more interesting and accessible.

Varna Mayor, Kiril Yordanov, noted his city had 125 years of history in tourism, and in recent years the City Hall had slated BGN 11 M of its own funds for cultural events.

The Roman Baths are one of the most valuable monuments of culture in Varna, situated in the central part of the city, on the corner of the streets San Stefano and Khan Krum. This is one of the sites of the Archaeological Museum in the city.

The Public Baths of Odessos are one of the most preserved architectural monuments of the Roman Age in Bulgaria (1st – 4th century AD). They are of the so called "small imperial style" and their construction refers to the end of the 2nd century AD. This is the largest roman bath on the Balkan Peninsula – with an area of 7000 square meters. It is the forth in size in Europe – among the baths of Karakala and Diocletian in Rome and Trevira (Trier, Germany). It was used by the end of 3rd century.