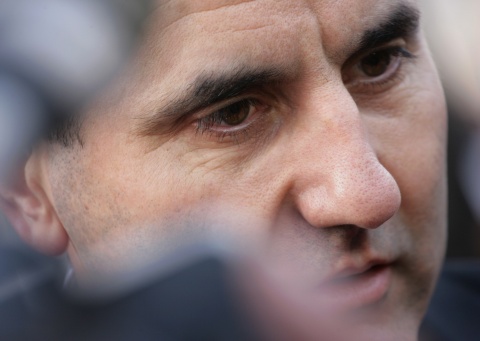 Bulgarian Interior Minister, Tsvetan Tsvetanov, informs that a Sofia prosecutor has been providing cover up for her son who was a thug. Photo by BGNES

A prosecutor in Bulgaria's capital Sofia has provided cover up for her son's criminal activities, according to the press office of the Interior Ministry.

The female prosecutor also gave the son advice on how to conceal evidence in a special operation of the Main Directorate for Combatting Organized Crime, GDBOP, against a gang dealing with distribution of illegal drugs.

The operation was carried out on January 15 and 16 when police arrested the ringleader – a 38-year-old man from Sofia, and 4 accomplices. When they went to the home of a fifth suspect, a 34-year-old man also from Sofia, he managed to throw out of the window his two illegal handguns, five bullets, and a marihuana joint.

During the raid of the apartment, the police seized two holsters and a cell phone.

The 34-year-old man has a criminal record for hooliganism and inflicting bodily harm.

The investigation has established that he is a son of a prosecutor, who provided cover up for his activities and gave him advice on eluding law enforcement.

Interior Minister, Tsvetan Tsvetanov, elaborated before Focus news agency the mother worked at the Sofia Regional Prosecutor's Office and advised the son on the phone how to conceal the weapons.

Tsvetanov further informs he has called Chief Prosecutor, Sotir Tsatsarov, to alert him about the case, saying he was firmly for punishment of people, such as investigators, policemen, and magistrates, who must reinforce the law, but instead conceal evidence of serious crimes.