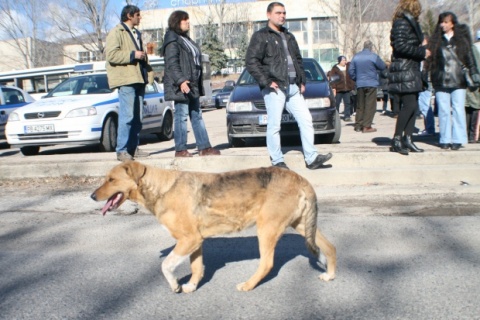 The workers' strike at Bulgaria's State-owned arms manufacturer, VMZ Sopot, is in its 22nd day. Photo by BGNES

On Wednesday, the Parliament removed at first reading the plant from the list of privatization bans, after its sale failed through last week.

The trade unions at the plant already blasted the move, calling it belligerent, and warning the ruling Citizens for European Development of Bulgaria party, GERB, about serious consequences. The syndicalists firmly oppose plans to lay off 900 people from the total of 3 200 VMZ Sopot employees.

Last Monday, the trade unions received the recovery plan and the management invited the unions to sit on the negotiations table.

The syndicates are outraged because the proposals include only budget cuts and sacking of personnel without clear commitments about the future of the plant, they say.

Meanwhile, the crisis and the workers' strike at the plant are continuing Thursday. The workers have not received salaries since October despite promises of the Economy Ministry, made on January 15, everyone would get a month and half wage. High school students in the town even walked out of their classrooms to join the protest rally. Former employees have also supported them.

On Monday, the Plovdiv District Court started the bankruptcy trial against VMZ Sopot on the claim of the Mechanical Plant Devin for BGN 2.5 M in debt owed to it by the weapons manufacturer.