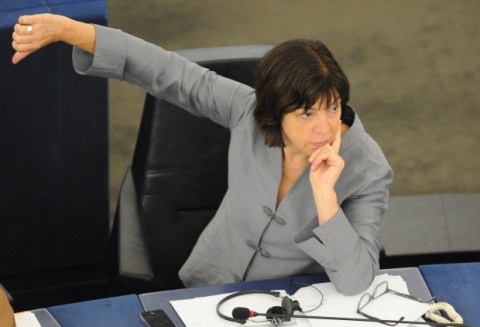 Rebecca Harms, Co-President of the GREENS/EFA in the EP is in Bulgaria to discuss ways to preserve nature and risks of nuclear power use. Photo by EPA/BGNES

Construction in protected areas in Bulgaria must be examined at the European level, says Rebecca Harms, the Co-President of the GREENS/EFA in the European Parliament

The leader of the Greens/European Free Alliance (EFA) is in Bulgaria Thursday to discuss personally with Prime Minister, Boyko Borisov, and Economy and Energy Minister, Delyan Dobrev, the issues of preserving the country's beautiful sites and nature.

Harms is quoted saying construction in protected areas is not the best solution. She is proposing to make more attractive what has been already built.

The reason for the talks is the so-called "Dunes Gate" scandal that flared at the end of 2012 when eco activists alarmed about construction activities destroying sand dunes in a protected area in the historic Black Sea town of Nessebar. It emerged the terrain has been sold to private developers by the Agriculture Ministry for nearly pocket change.

Harms will also discuss with Borisov and Dobrev construction in mountain resorts. She will further share with them her opinion on nuclear energy and the referendum on its future in Bulgaria.

The referendum, scheduled for Sunday January 27, 2013, asks Bulgarian voters whether they would like their country to develop nuclear energy by creating new nuclear units.

Harms will also host a press conference and several events in order to inform the public about the risks of an extension of nuclear power use.

Originally, the second Nuclear Power Plant in Bulgaria had to be built by Russian state company Atomstroyexport in the Danube town of Belene, but the Bulgarian cabinet froze the project in early spring due to perceived lack of economic effectiveness.