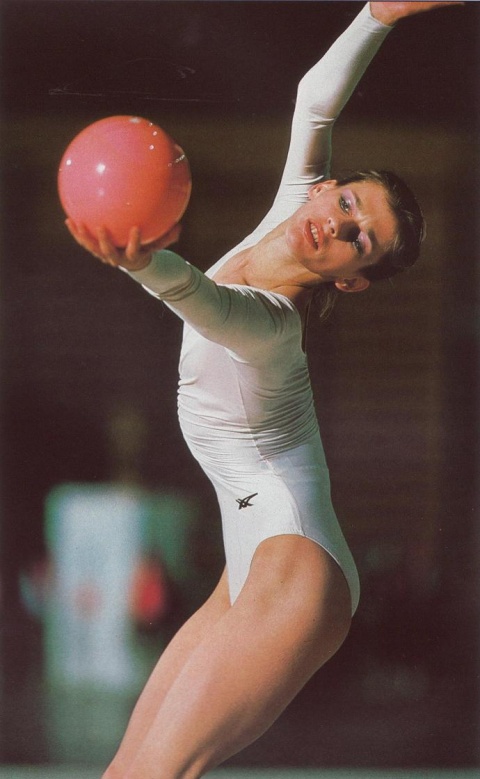 Bianka Panova was the first rhythmic gymnast to get a clean sweep of all 5 (All-Around, Ribbon, Clubs, Hoop, Rope) gold medals at the 1987 world championships in Varna with the perfect score of 40.00 points. File photo

Bulgaria's dominance of rhythmic gymnastics during the communist regime was impressive, but the success came at a sickening price, a book by a former world champion has revealed.

The pursuit of glory was taken too far, as the young women were pushed beyond reasonable limits in the training centers in Sofia, the scandalous autobiography by Bianka Panova "In the name of the big goal – behind the curtains", claims. While the book may explain Bulgaria's success in the sports, it also highlights the human cost of this "glory" to the girls, who were pushed by their famous coach Neshka Robeva to tears and physical pain.

Panova, who was one of the Golden Girls of Bulgaria that dominated Rhythmic Gymnastics in 1980's, describes the glorious period as "a nightmare", "brainwash" and "sadism".

She was the first rhythmic gymnast to get a clean sweep of all 5 (All-Around, Ribbon, Clubs, Hoop, Rope) gold medals at the 1987 world championships in Varna with the perfect score of 40.00 points.

The next year however as Panova competed at the 1988 Seoul Olympics, she made a mistake in the preliminary round, dropping a club. This kept her out of the medals, she finished in fourth place. Coach Robeva was furious and the clash that followed spelled the end of Panova's career and life in Bulgaria. Before 1989, the Bulgarian state invested extravagantly in sports in order to show its supremacy over the rotten capitalist system. These investments were intended not to boost participatory sports but to yield medals.

For the public, it was a moment of glory when the national anthem awoke national pride. Rhythmic gymnast coach Neshka Robeva became а public intellectual, wrapped in popular legends about firmness of principle and tenacity of will.

In the book, which is already out on the market and selling well, Bianka Panova recalls the nightmare from those days with great passion and anger.

The grueling gymnastics program started before dawn and sometimes even went late into the night. In her words the trainings were accompanied by shouts, insults, pain and tears.

One day Panova was forced by coach Neshka Robeva to keep on training until 3 am, demanding that she plays without a single mistake ten routines.

"Robeva demanded that we just play without any mistakes and be silent! What she forgot is that if you don't put your heart into what you do, everything goes down the drain. You can't do art without putting your soul in it. And our souls had fled long ago so that they could get away from this nightmare."

Bianka Panova retired from the sport in 1989 and became a coach in Italy where she coached the Italian National Champion, Katia Pietrosanti, who is the only Italian to medal at a world championships. Bianka tried to make a comeback in 1992 but failed to make the Bulgarian Olympic team. She returned to coaching in 1993, this time in Belgium.

Bianka Panova currently lives in Belgium with her husband, physiotherapist and now physician, Tchavdar Ninov, and their two sons Steven and Richard.

Later on she dedicated to her family and helped to the successful medical practise of her husband Dr.Ninov. In 2009 she was invited as a "star" in the famous TV Show "Dancing With The Stars", where once again she proved to be the best dancer ever and won with the highest public vote.