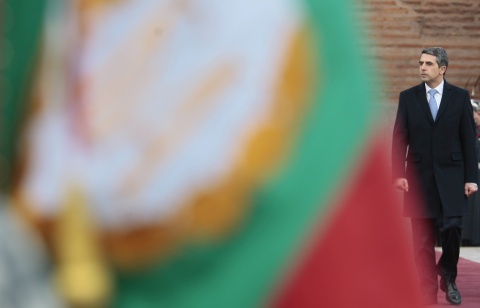 "Let it be clear – Bulgaria is not a second Greece. Bulgaria doesn't wage a war [on Macedonia]. Not to mention that the argument that we are addressing some domestic issues with respect to the upcoming elections [by blocking Macedonia's EU talks date] is absurd.

"We have good relations. But we wish to address the problem where it exists. It is a problem, and a problem that has been very clearly defined by us – namely, those presently in power in Skopje, unfortunately, aren't observing the Declaration for Good-neighborly Relations that we signed back in 1999. We have an objective criteria – we have a declaration that is not being fulfilled. We want nothing more than that.

"That's why we're saying, "Let this declaration that we came together for be turned into an agreement with a standard wording – the same that Bulgaria signed with Greece, Turkey, Romania."

Bulgarian President Rosen Plevneliev presenting Bulgaria's position on relations with Macedonia and demanding that the two states sign an agreement for good-neighborly relations.