EP to Debate Rule of Law in Bulgaria over 'Dogan Attack' 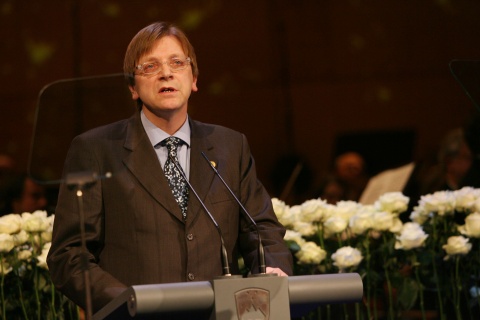 The Group of the Alliance of Liberals and Democrats for Europe in the European Parliament is going to request a plenary debate on freedom and rule of law in Bulgaria over the "Dogan" incident.

The news was reported by the Bulgarian National Radio, BNR, citing ALDE Chair, Guy Verhofstadt, saying the Group, together with Bulgaria's ethnic Turkish party Movement for Rights and Freedoms (DPS), believes in societies founded on liberal values and freedoms, human rights, respect for minorities, and pluralism.

Verhofstadt stressed these foundations, regretfully, were not convincingly present in Bulgaria.

The ALDE Leader is firm the attack on Bulgarian ethnic Turkish leader, Ahmed Dogan, must be interpreted as an attempt for political murder; its significance should not be downplayed, and the perpetrator should be punished.

Bulgarian Movement for Rights and Freedoms party leader Ahmed Dogan was attacked by Oktay Enimehmedov, 25, with a gas pistol at the party congress in Sofia last Saturday.