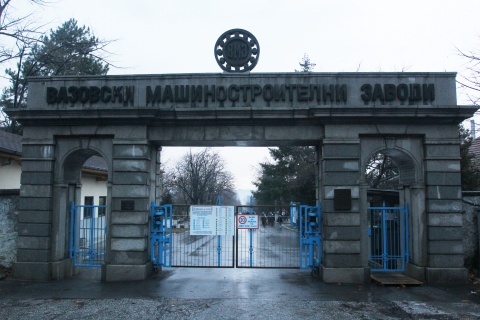 Bankruptcy proceedings for the troubled VMZ Sopot military plant are underway at the Plovdiv District Court. Photo by BGNES

Students, pensioners, and other residents of the town of Sopot in South-Central Bulgaria, gathered for a protest Monday morning in front of the ailing military plant VMZ Sopot.

Hundreds of students of the Vcational High School Gen. Vladimir Zaimov and other local schools gathered in front of the gates of the plant, some of them trying to climb over the gates and break in through the closed doors of arms manufacturer, according to reports of Sega daily.

The students, some of them children of the employees of the troubled military plants, chanted "We are hungry!", "We want a future!" and "Secure work for our parents!".

A large number of pensioners and other Sopot residents joined the protest of the children.

A group of protesters blocked the Sofia-Burgas main road.

Meanwhile, bankruptcy proceedings for VMZ Sopot are underway at the Plovdiv District Court, after the attempt to sell the troubled state-owned plant collapsed.

The bankruptcy proceedings were initiated by Mechanical Plant-Devin AD and the first hearing has been scheduled for 2 p.m. on Monday, according to reports of the press office of the Plovdiv-based court.

The trial will be held behind closed doors.

VMZ Chief Executive Ivan Stoenchev made clear Monday that it would be clear by the end of the day which units of the arms maker would be have to closed and what would happen to the workers.

The CEO of the military plant added that the closure of loss-making units was part of the rehabilitation program of VMZ Sopot.

He added that the program was yet to be presented to the trade unions at the plant, after which talks would take place regarding the number of employees which would be dismissed.

Following an economic analysis of the governing body of VMZ Sopot, some 900 workers of the plant are to be dismissed, while trade union representatives insist that the number of laid-off workers must not exceed 500.

The military plant has a total headcount of 3100 and debts exceeding BGN 150 M.

Last week, Bulgaria's parliamentary economic committee voted in favor of taking VMZ Sopot off the list of state-owned companies which can only be sold on the basis of a special strategy.

On January 14, Bulgaria's Privatization and Post-Privatization Control Agency (PPCA) terminated the procedure for the sale of military plant VMZ Sopot.

PPCA Executive Director Emil Karanikolov noted that EMKO EOOD, the sole bidder for the plant, had submitted a binding offer before the deadline (3 p.m. on January 14) but had failed to transfer the mandatory EUR 3 M deposit for participation in the privatization procedure.

Karanikolov argued that the problem was that the sole candidate in the privatization attempt had requested a renegotiation of the collective bargaining agreement between the trade unions and VMZ Sopot.

EMKO's CEO, Emiliyan Gebrev, previously asked the trade unions to agree to cut the staff of the plant by 2000.

Workers at VMZ Sopot have been staging protests and strikes over unpaid salaries since December.