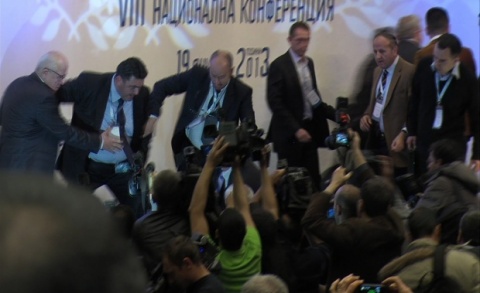 The "lynching" of Oktay Enimehmedov, the man who tried to take a shot at the leader of Bulgaria's ethnic Turkish party DPS ("Movement for Rights and Freedoms"), Ahmed Dogan, by party activists shows the party's true face, according to Bulgarian Interior Minister Tsvetan Tsvetanov.

The failed assassin was beaten severely almost immediately by senior DPS activists right after he was put down.

"We must condemn these actions again a man who had been made harmless. We saw some very serious violence broadcast by the media," commented Monday Interior Minister Tsvetanov, who is also the deputy chair of Bulgaria's ruling center-right party GERB.

Tsvetanov reiterated statements by other Bulgarian officials that Enimehmedov technically did not make an assassination attempt because the gas pistol that he attempted to shoot Dogan with cannot be used to kill a person.

"The technical probe shows this weapon cannot kill. He wanted to make a public political demonstration," the Interior Minister added.

Tsvetanov described the failed assassination of Dogan as "a severe act of hooliganism dressed up as a political demonstration".

"The leaving of DPS by Kasim Dal (Dogan's long-time close aide – editor's note) created problems in the party. The only person who can consolidate the party is Ahmed Dogan. If somebody thinks that Dogan has quit politics, they are wrong," he said, adding that in the ethnic Turkish party Dogan's leadership is very strong, referring to the fact that at the conference marred by the assassination attempt the founder and long-time leader of DPS nominated his successor – Lyutvi Mestan, who got approved by the delegates as the new chair.

Tsvetanov further commented that he is fully satisfied with the investigation process and snubbed criticism about the insufficient security at the DPS forum and the fact that police officers in uniform arrived too late on the spot.