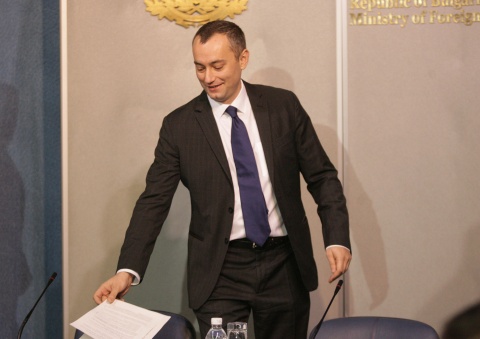 Bulgaria's Foreign Minister Nikolay Mladenov has paid an unannounced visit to brief the Israeli leadership on the investigation of the July 18, 2012, Burgas Bus Bombing which killed 5 Israeli tourists and a Bulgarian bus driver on the Bulgarian Black Sea coast.

According to Bulgarian and Israeli sources, Mladenov met Thursday with President Shimon Peres and Prime Minister Binyamin Netanyahu, as well as with National Security Advisor Yaakov Amidror. No details of the meetings were forthcoming.

A Bulgarian Foreign Ministry spokeswoman said the issue of the probe was discussed in the meetings. "Results of the investigation will be made public once it is completed and Bulgaria has enough evidence to back it up," she added.

Bulgarian Interior Minister Tsvetan Tsvetanov, in Dublin for talks with European Union ministers on Thursday, was also expected to  update Bulgaria's EU allies with the latest news, his office said.

Bulgaria has said the bombing was plotted outside the country and carried out by foreigners but has yet to publish full findings from its long-running investigation, which officials say is not yet complete.

In September, Britain and the Netherlands urged other EU governments impose sanctions on Hezbollah for providing support to Syria's President Bashar Assad.