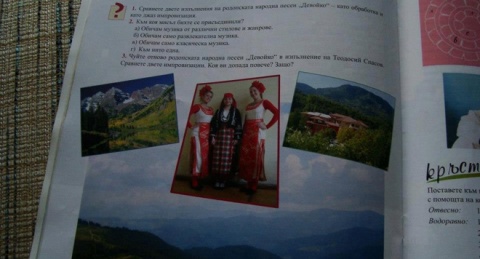 The photo of the Rocky Mountains in Colorado (on the left) has been used to illustrate a Bulgarian folk song in a music textbook. Photo by Facebook

A picture from the Rocky Mountains in the US State of Colorado has once again prompted ridicule  in Bulgaria, as it turns out it has been used to depict "Bulgarian nature" in an 8th grade schoolbook.

The photo of the Rocky Mountains in Colorado has been used to illustrate a Bulgarian folk song in a music textbook, it emerged Wednesday.

Representatives of the textbook's publisher, Azbuki-Prosveta, have told Dnevnik.bg that they are currently inspecting how the picture got there.

The textbook was published in 2009. Apparently, no one noticed that the picture was not from Bulgaria before it gained "notoriety" just two weeks ago.

The exact same picture marred the first televised New Year's Eve address of Bulgarian President Rosen Plevneliev, as it was used to illustrate "the beauty of Bulgarian nature" during his speech.

It was made clear at the beginning of January that the picture ended up on the website of tourist company Balkantourist as a result of "copy – paste" by a negligent official of the firm.

A Balkantourist employee was dismissed as a result of the Presidential blunder.