Bulgaria Formally Moves to Pull Out Troops from Afghanistan 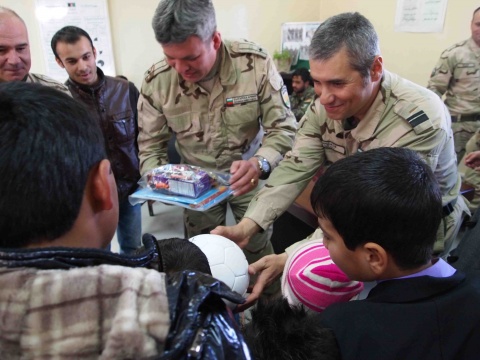 Bulgarian military advisers in Afghanistan present gifts to Afghan kids during a Christmas party at the end of 2012. Photo by Defense Ministry

Bulgaria's Cabinet is adopted a long anticipated decision to terminate partly the Bulgarian military mission in the NATO-led ISAF forces in Afghanistan.

The decision came in accordance with strategy for transformation of Bulgaria's participation in the ISAF mission in Afghanistan, which was adopted by the government at the end of 2011, following a decision by the USA under President Barack Obama's plan for a major withdrawal from Afghanistan by 2014.

Under the partial pullout plan adopted by the Borisov Cabinet, as of December 31, 2012, Bulgaria is pulling out its medical teams and specialists from Afghanistan's Heart province; as of March 1, 2013, it is supposed to start bringing back its company guarding the airport in Kabul, and as of March 31, 2013 – its team of military instructors.