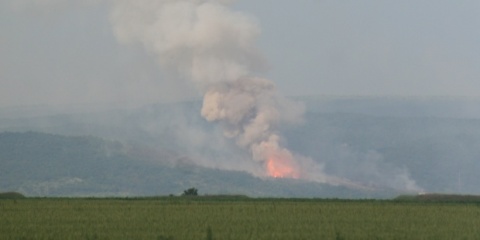 A photo showing the explosition at Bereta Trading's ammo depot near the Petolachkata road junction in SE Bulgaria which killed three of its workers in June 2012. Photo by BGNES

A senior civil servant from Bulgaria's Defense Ministry, Heni Shiyakova, has been confirmed by the Sofia Administrative Court to have been in conflict of interest in her dealings with a private firm, Bereta Trading.

The Court announced Wednesday it has confirmed a ruling of the Bulgarian Commission on Conflict of Interest, a government watchdog, which found earlier that Shiyakova took a trip to the exotic resort island of Bali that was paid for by Bereta Trading.

Bereta Trading, a private Bulgarian firm specializing in ammunition utilization, became more widely known in June 2012 when an explosion at its ammo plant near the Petolachkata Road Junction, close to the city of Sliven in Southeastern Bulgaria, killed three workers.

Bereta Trading is also known to have won public procurement tenders of the Defense Ministry for the utilization of munitions, including from the notorious Chelopechene military depot near Sofia, which exploded in July 2008.

Heni Shiyakova, whose work at the Bulgarian Defense Ministry included supervision of the public procurement orders executed by Bereta Trading, accepted from the firm a voucher for an exotic vacation in "Bali and Singapore, or another destination by choice".

Shiyakova's potential conflict of interest was first investigated in 2010 when she was referred to the Conflict of Interest Commission; in 2011, the Sofia Military Prosecutor's Office started a probe against her.

The 2008 contract for the utilization of ammunition was worth BGN 3.5 M, and was awarded to Bereta Trading and another firm back in 2008; Shiyakova was a leading expert on the public procurement procedure and was also supposed to exert supervision on the execution of the contract.

Several months later she got the exotic vacation voucher from Bereta Trading worth BGN 6 765 that took her to Bali.

Shiyakova appealed the initial ruling of the Conflict of Interest Commission which led the Sofia Administrative Court to confirm the ruling. The legal procedure against Shiyakova is still in progress.