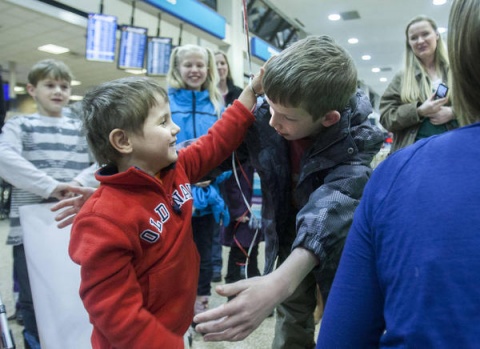 Gavin Thomas' new older brother Bradley gives him a hug after Gavin arrived at the airport. Photo by Deseret News

SALT LAKE CITY — The boy with the big eyes and the big smile doesn't speak a lick of English, but the joy was evident on his face and in his feet.

Gavin Nikolov Thomas, a band of balloons tied to his belt loop, ran around the Salt Lake City International Airport Saturday night laughing, squealing at puppies, bopping strangers and playing with his new siblings and friends.

"It's one big adventure," the boy's new dad, Andy Thomas, said. "He's full of life despite everything that's happened."

It was a work of love and faith that started about a year ago when Lindsay and Andy Thomas, parents to three who had always wanted to adopt, saw the boy's picture on an adoption agency website. Lindsay Thomas just knew the child living in a Bulgarian orphanage was meant to join their family and went to work raising the funds, about $28,000, to get him here.

As for what it felt like to see him run toward her children, with their neon welcome signs and eager smiles?

The group of children, family and friends was a far cry from where Andy and Lindsay picked Gavin up Monday.

"It was surreal. It was just like you think an orphanage would be … dark, cold," Lindsay Thomas said.

Gavin, officially adopted on Dec. 4, had never seen his parents before. Their meeting was effortless just the same.

She said the boy has learned some sign language that allows him to communicate his basic needs. The word he says most is "Ciao," for goodbye.

Kaitlyn Thomas, 4, doesn't seem to mind that her new brother doesn't speak her language. She is quick to play with her new brother. When he disappears behind one of his welcome posters, she leads the other children in a playful chant of "Where's Gavin?!"

"Love him," she said of having him here.

She wraps him in a tight hug.

"That's why it's all going to work," Andy Thomas said, pointing their way. "I think Kaitlyn and Gavin are going to get along the best."

Gavin, 6, is two years older than Kaitlyn, but the top of his head fits snugly below her chin.

"I thought he would be a little bigger," the Thomas' oldest child, Bradley, commented. "I thought he was going to be bigger than my sister."

Gavin has stage four renal failure and his single kidney barely functions, requiring a permanent catheter. Lindsay Thomas' main priority is getting him healthy with the help of medical care he couldn't get in Bulgaria.

She notes his spirits belie his illness.

His first doctor's appointment was scheduled for Monday.

"We're just happy to have him home, in a family," Lindsay Thomas said. "It's one less child in an orphanage."

Lindsay Thomas' mother, Cindy Rounds, came in for 10 days from San Clemente, Calif., to watch the couple's three children while they traveled to Bulgaria. She said the Thomas children counted down the days until they could come see their new brother.

She is confident that Gavin couldn't have a better mother, either.

"I admire her totally," Rounds said of her daughter. "She had this dream and she conquered it. … I'm so proud of her. She's full of love."

Andy Thomas said they will take the future in steps. The important part will be "learning each other" and teaching Gavin that he can trust them. He looks forward to the opportunities the boy will have in his new life.

His voice breaks as he looks at his wife and children all together.

"It's a little overwhelming," he said.