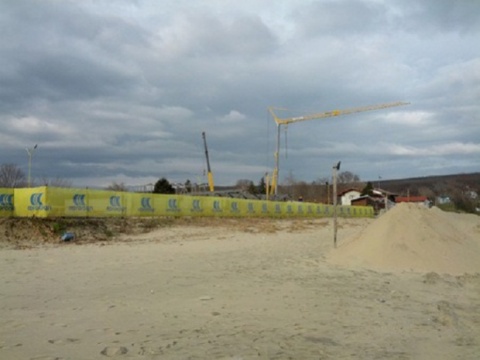 Information that a company was pouring concrete to build a vacation village on what is one of the last remaining non-urbanized beaches in Bulgaria – Irakli stirred mass protests in Sofia and several other cities. Photo by BGNES

The activists from several organizations, including the Greens party, want the National Park to include 10 resort beaches and adjacent terrains up to 350 meters from the coast line and all lakes and wetlands near the shore.

Some of the beaches to be included in the park are Irakli, Kamchiyski Pyasatsi, Karadere, Arkutino, Krapets, and Sveta Anna.

Borislav Sandov from the Greens party explained the proposal involves directly the Ministry of Environment and Waters, but will be sent to all political parties.

All terrains in a National Park are only State property with the Ministry controlling construction while the beaches could still be given for concessions. Sandov added that all land plots for which deals to be sold at a very low price have been concluded in recent years must be returned to the State-ownership status in order to be protected.

The scandal with construction in protected areas in the Black Sea coast has been flaring in Bulgaria since the end of last year and triggered a new wave of protests in several cities, including the capital Sofia.