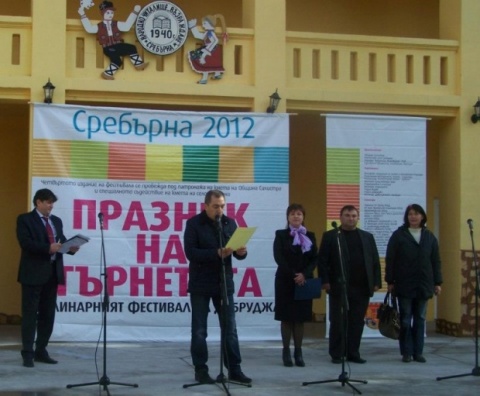 Stefan Gospodinov (at the microphone) has been elected MP from Bulgaria's ruling GERB party from the Silistra voting region on the Danube. File photo from GERB

Bulgaria's Member of the Parliament from the ruling GERB party, Stefan Gospodinov and his wife have become wealthier by BGN 1.5 M during the party's term.

The money is listed as a donation from their children.

An investigation of "168 Chassa" (168 Hours) weekly, shows that the daughter, Galina, 27, has a company with a starting capital of BGN 5, while the son, Kaloyan, 23, owns a small business with declared annual income of BGN 22 000.

The MP has listed BGN 1.5 M in his declaration before the National Audit Office, NAO, as a donation from his daughter, who has sold real estate, purchased by the parents on her behalf.

In 2004, Gospodinov's daughter, 18 at the time and still in high school, has purchased an 11-acre abandoned farm field in the village of Bliznatsi, but the sales amount is not listed in the Trade Registry.

In 2011, Galina Gospodinova has registered the "Silagro" company, which deals with farming production. In the same year, she sold two properties with a total area of 10 acres in the "Kamchiya" beach resort, in Bliznatsi. The current land price there is EUR 27 per square meters, meaning the properties price should have been over BGN 0.5 M.

The MP has informed that his daughter has mortgaged the land plots in 2010 with Varna's "New Investment" company being the creditor.

Several months later, in March 2011, the mortgage has been deleted on the request of the advertisement agency "Interreklama," owned by Lilyana Yordanova, who is also on the Board of Directors of the creditor.

A day before the deletion, Galina Gospodinova sold the properties to "New Investment," which is owned by an offshore company, registered in Gibraltar.

In 2011, the MPs daughter has also purchased and sold several farming properties in the village of Vetren, near the Danube city of Silistra.

Galina has a degree in fashion design from Italy while the son Kaloyan has attended college in Great Britain.

He owns three businesses - two dealing with wind energy and one with advertisement. The first two, according to the books, had a modest 2011 annual turnover of BGN 22 000, while the third was registered in 2011.

According to "168 Chassa," Gospodinov has received an income of BGN 35 543 listed in his declaration as income from contracts in addition to his MP salary. He now says this money was from the parliamentary salary.

MPs are banned from working elsewhere under labor contracts, and can only receive royalties as doctors, lawyers, lecturers or consultants.

Gospodinov has also declared ownership of a shoe store from which he had received BGN 3 825, and as "other income" a "donation from the sale of a land plot, owned by an offspring" in the amount of BGN 768 250 for himself and of BGN 770 000 for his wife.

Gospodinov has been elected MP from the ruling Citizens for European Development of Bulgaria party, GERB, from the Silistra voting region on the Danube and is a member of the Committees on Social Policy and Regional Policy.