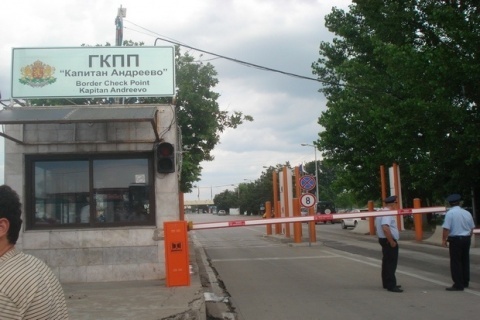 The Kapitan Andreevo border crossing on the Bulgarian-Turkish border, near the town of Svilengrad, where Customs frequently make headlines for corruption practices. Photo by dariknews.bg

There are strong suspicions that sixteen Customs officers from the Svilengrad Customs on the Bulgarian – Turkish border have been hired after presenting fake college diplomas.

The news was reported Thursday by the Bulgarian National Radio, BNR.

A check of the Customs Agency has shown that on the day the officers had to take their final college exam, known as the State exam, 10 of the 16 worked during the day shift, and 6 worked the night shift. In addition, some of them somehow took 6 exams in one day at some point during the course of their studies.

Customs Chief, Vanio Tanov, is quoted saying that the above is certain evidence the diplomas are fake. The 16 cases will be referred to the new Chief Prosecutor, who was just sworn in office Thursday.

Four people from the Svilengrad Customs have already been fired for using a forged document.

One third of them were fired, and the rest were given a deadline to show improvement.

The Svilengrad scrutiny coincides with renovation works of the Kapitan Andreevo border checkpoint between Bulgaria and Turkey.