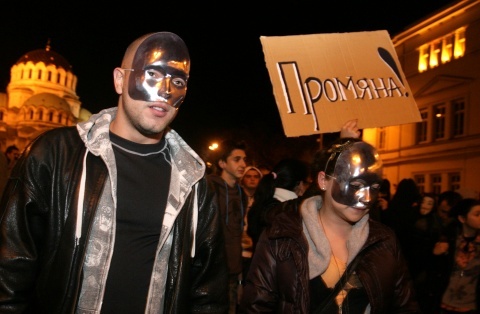 "Change", reads one of the slogans raised by Bulgarian youth during their "Anonymous" protest in downtown Sofia on November 5, which drew an unexpectedly high turnout. Photo by BGNES

Thousands of Bulgarians are expected to take to the streets of the capital Sofia on Tuesday in an anti-establishment protest, which comes on the heels of November's mass rally organized by the local unit of the Anonymous hacktivists.

Tuesday's rally will take place under the slogan "Uprising for a New Bulgaria". The protesters will call for dissolving Bulgaria's parliament, appointing a new interim government, made up of experts and people nominated by the civil society.

Thousands of Bulgarian youngsters staged a mass anti-government rally in downtown Sofia late on November 5, demanding an end to the rule of Prime Minister Boyko Borisov and the GERB party, while shouting other anti-etstablishment slogans as well.

The protest rally in the center of the Bulgarian capital was organized through the social media by the Bulgarian unit of the Anonymous hacktivists, on the occasion of the Global Day of Protests declared by the Anonymous, and attracted a surprisingly high turnout.

Several protesters from Bulgaria's "Anonymous" rally were arrested, according to a report of the BGNES news agency.