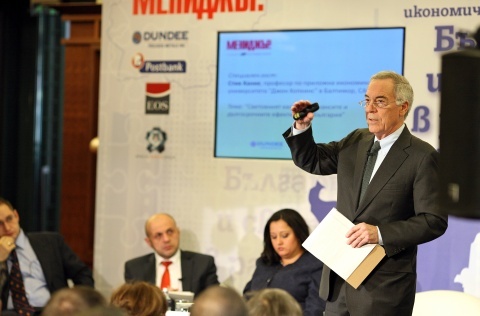 Steve Hanke, known best here as the architect of Bulgaria’s currency regime, is pictured here speaking at the International Economic Conference: Bulgaria and the World in Progress, sponsored by Manager magazine. Photo by Yulian Donov for Manager magazine

Johns Hopkins economist Steve Hanke, who designed the currency board in Bulgaria in the 1990s, has praised the country as a star pupil in terms of fiscal discipline.

"The prize should go to Bulgaria," Hanke said, speaking for the BBC program "In the Balance", which stared last week into the banking black hole of debt.

The program discussed how best to navigate away from the huge debts faced by many European banks and how to deal with banks that have broken the law.

"Bulgaria was completely bankrupt by the end of 1996 and had hyper-inflation that peaked with a monthly inflation rate of 242%, in February 1997, wiping out the banks and the country."

"I was President Stoyanov's adviser at the time and we installed the so called Currency Board, absolutely rigid and solid banking regulations, which are counter-cyclical and mean that in the good times you are putting a lot aside."

He pointed out that Bulgarian banks' marginal reserve requirement went up to 12% in the last boom and now it has already been lower than 7%.

"Right now Bulgarian banks capital adequacy is running at 16.7, which is way above normal levels. They provision for non-performing loans in a rigorous way and require that the provisioning occur almost automatically. But the banks have a lot of capital and they can provision. The thing is solid as a rock."

Hanke has recommended for months that Sofia stay out of the euro and has recently took a firmer than ever stance.

"It would be a complete disaster if you did not have the currency board, " Hanke said in an interview for bTV private channel during his visit to Sofia last month.

Every lev in circulation has since been backed 100% by foreign exchange reserves at the national bank—first the mark, and since 1999 the euro. This arrangement is known as a currency board and is much stronger than a mere currency peg. That's because in principle under a currency board the central bank could meet any speculative attack on the lev by accepting levs in exchange for the euros the bank holds in reserve.