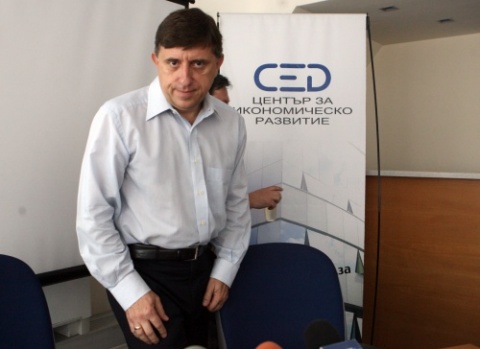 Georgi Prohaski, head of the CED. Photo by BGNES

The head of a Bulgarian think-tank has predicted a 1.5% GDP growth in the country in 2013, echoing the forecast of the International Monetary Fund.

"Our forecast is for the real GDP growth to continue slowly growing by up to 1.5% in 2013 on the back of weak domestic demand and foreign investments," Georgi Prohaski, head of the Center for Economic Development, told 24 Hours daily.

The country's unemployment rate is expected to remain unchanged at 12% and even 13%.

Bulgaria's gross domestic product is expected to mark a total growth of around 1% for 2012, according to Minister of Economy and Energy Delyan Dobrev, way below the forecast 2.9% in the state budget.

Dobrev pinned the slow growth on Bulgaria's failure to significantly increase its exports, something he explained with the lingering eurozone crisis.

Dobrev argued that Bulgaria must steep up efforts to expand trade with markets outside the EU, especially in East Asia, and in particular China.