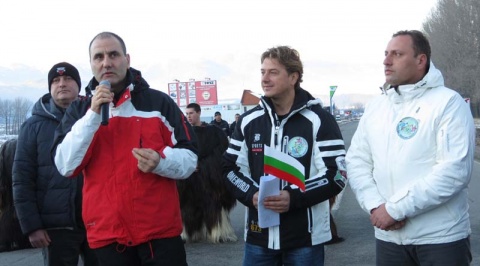 Bulgaria Vice-PM and Minister of Interior Tsvetan Tsvetanov (L) speaking at the rally in Bansko. Photo by Bansko Municipality

Tsvetanov expressed support for Bansko residents, who for a thrid day in a row have come out to request an expansion of ski facilities in the resort.

The action of Bulgaria's top cop and Vice-PM is a culmination of a string of high-ranking visits to the protests, which saw Parliament Speaker Tsetska Tsacheva and vice minister for tourism Ivo Marinov also showing up.

"I am convinced that in a very short time, protesters' demands will be satisfied. Their requests will be heard at the very first cabinet sitting in 2013," stated Tsvetanov.

8,000 Bansko residents, organized by mayor Georgi Ikonomov, have submitted to Bulgaria's President Rosen Plevneliev a petition requesting for expansion of facilities in the resort.

Sunday Ikonomov claimed that Plevneliev has already given his support for the petition.

Petitioners have argued that environmentalists and others opposing the further development of Bansko are just bullying authorities and are dooming the region to economic underdevelopment.

Opposers to projects for ski facilities expansion argue that Bansko is already overdeveloped, with local companies requesting further ski runs only to make up for an excessively high number of tourist beds in Bansko made possible by the construction boom in the 00s.

In addition, they have argued that the local ski operator, Yulen, has overstepped the territory for ski facilities allowed by the state in the Pirin National Park, which is also a UNESCO World Heritage site.

Environmentalists have argued that the manifest support of high-ranking statespersons for the protests is out of order and is showing that the rallies have been staged, in a situation smacking of Vladimir Putin's Russia.

The current protests in Bansko bring to mind rallies in June in support of Bulgaria's new Forestry Act intended to ease development in forest areast, which were backed by ruling GERB party MPs and cabinet ministers.

The legislation was however scrapped, after massive protests against them blocked a major intersection in Bulgarian capital Sofia for several days on.

The amendments to the Forestry Act were pulled through cabinet and parliament under pressure by the Vitosha Ski company, which operates facilities on Vitosha Mountain nearby Sofia.

Both Vitosha Ski and Yulen are known to be controlled by notorious businessman and Bulgarian Ski Federation chair Tseko Minev, who also holds First Investment Bank.