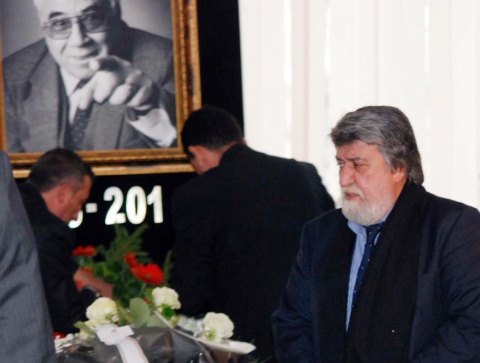 Bulgarian Culture Minister Rashidov was among the politicians to pay their last respects to the great actor, who died on Tuesday. Photo by Sofia Photo Agency

Relatives, friends, colleagues, politicians and ministers bowed heads in memory of Georgi Kaloyanchev, the prominent and beloved Bulgarian actor, at a funeral service on December 21.

Sofia mayor Yordanka Fandakova was among the first politicians to pay their last respects to the great actor, who died on Tuesday.

"Bulgarians lost their dear Georgi Kaloyanchev, who devoted his life to the noble mission to inspire optimism and bring a smile to our faces," reads a letter of condolences by President Rosen Plevneliev.

"Kalata never stopped believing that we should always be guided by love and good intentions to blaze a trail. Through his talent Kaloyanchev did not stop reminding us who we are, why we are here and what we should be," said the letter of the head of state.

"Loved and revered by the audience, his colleagues and friends, Georgi Kaloyanchev will remain forever in our hearts with his bright talent and charismatic actor's presence in theatre and cinema", the Union of Bulgarian Actors said in a statement, circulated to the media.

Kaloyanchev was a very versatile actor and will be remembered for both his comedy and dramatic roles.