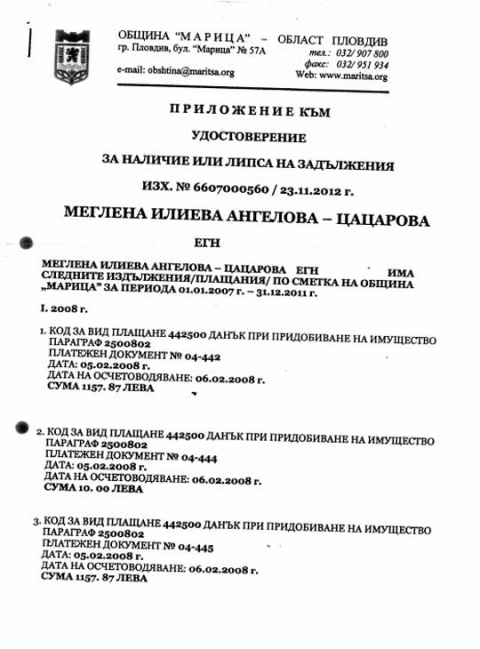 A copy of the document showing that the wife of the candidate for Bulgaria's new Chief Prosecutor has paid only BGN 10 in taxes for a real estate purchase with a fictitious price, which implicates her in tax evasion. Photo by Bivol

Sotir Tsatsarov, Chairman of the Plovdiv Regional Court and Chief Prosecutor candidate, has lied during the hearings before the Ethics Committee of the Supreme Judicial Council, VSS.

The statement was made by investigative Bulgarian journalists, Atanas Tchobanov and Asen Yordanov, editors of the site Bivol.bg, citing the shorthand notes from the hearing, published by the online news agency Dnevnik.

Before the hearing, Tchobanov and Yordanov sent a report to VSS about their own investigation of the properties acquired by Tsatsarov and his family.

At the hearing, the Ethics Committee questioned the candidate for Chief Prosecutor about Bivol's tipoff as well. One of these questions was when and how much tax was paid by Tsatsarov's wife, Meglena Tstasarova, for the transfer of ownership of two orchards in the village of Kostievo, near Plovdiv.

In November, Bivol wrote that in 2008, Meglena Tsatsarova has been involved in a deal where the actual price of two real estate properties has been purposefully concealed. Under a mutual agreement with the seller, the price listed in the notary deed has been 120 times lower than the actual one – BGN 1 000 instead of BGN 119 151.

The question to Tsatsarov, related to this deal, was if the tax that was paid at time of the transfer of ownership was based on the real price or the fictitious one, which calls for a fine under the Local Tax Act.

Speaking before the Ethics Committee, the candidate admitted that the listed price was fabricated, and reiterated he was not seeing anything illegal and even morally wrong in listing a much lower price than the real one – a statement that has stunned many in Bulgaria ever since the first time he made it.

The shorthand notes from the hearing further reveal that Tsatsarov insisted before the Committee that the tax has been paid on the day of the purchase; was based on the real price, and he had documents to prove it.

The journalists, however, insist the above statement is 100% lie. They say that the only truth in the Chief Prosecutor candidate's statements at the hearing was that he had indeed listed the real price in his 2008 property declaration, submitted in 2009 with the National Audit Office, NAO. This fact was reported in Bivol's first publication on the orchards purchase.

An inquiry with Plovdiv's "Maritsa" municipality's Local Tax service shows that the documented tax, paid on the day of the purchase, has been just BGN 10. (The document has been even published on the VSS site.) The remaining owed tax on the real price – BGN 1 181 has been paid two years after the deal and one year after the NAO declaration - in February 2010, with penalty interest for the delay.

The other two payments in the amount of BGN 1 157 each, listed in the document in question, were not for tax for the orchards, but for an apartment with a yard, acquired by Tsatsarova on the very same day.

The journalists remind that it has emerged after the purchase that the female seller was not the real owner of the orchards and the two buyers, (one of whom is Tsatsarova and who are also notaries public), filed a case with the Court in Kardzhali, seeking to get their money back.

The publication further recaps that it remains unclear if the full tax would have been ever paid if it wasn't for the trial in Kardzhali, when the real price was first documented.

As the journalists note, it is mindboggling why the Ethics Committee has accepted Tsatsarov's explanations without examining the document, and why did it issue an official conclusion that the hearing had shown that "Sotir Tsatsarov possesses the required moral qualities to be elected Chief Prosecutor of the Republic of Bulgaria."

Meanwhile, VSS controversially adopted the use of electronic vote in the election of Chief Prosecutor, stirring further suspicions the process will be flawed since with the paper ballot each VSS member votes at once for all three candidates. In the electronic vote, each nomination is voted separately, revealing the number of those for and against before the next nomination is to be placed for election.

Until now, the ballot vote has been used every time when there has been more than one candidate.

In the aftermath, the European Commission stressed in an official statement that they were watching very carefully the election of Chief Prosecutor in Bulgaria, particularly the adherence to the highest standards and maintaining the secrecy of the vote.