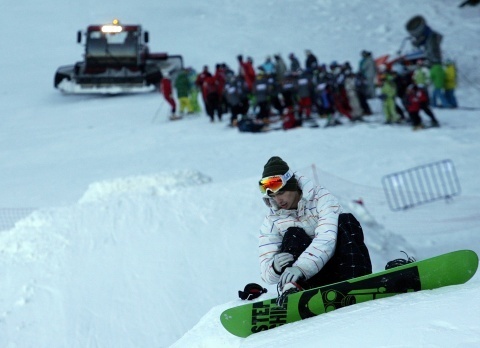 The opening ceremony at the Bulgarian winter resort Borovets is accompanied by snowboard and ski demonstrations. Photo by BGNES

The Vitosha ski season will be opened on Sunday.

The ski lifts in Bansko will be free of charge over the weekend. In 2012, the resort has acquired new, top-of-the-line snow guns that would increase by 20% the making of artificial snow.

Pamporovo is offering free transport from the city of Smolyan and the town of Chepelare for the opening ceremony.

The resort expects to use this winter 100% of the capacity of its modern snow-making equipment and to have the fastest-made and most compact artificial snow cover.

In 2012 – 2013, Pamporovo will host the European Cup for Women, FIS, the World Championship for Ski Instructors, the Winter Bike Duel 2013, and the snowboard Pamporovo Freestyle Open.

Borovets is also opening the season with free ski and lift passes. The program, which starts in the afternoon (14 pm), features a snow show, games and contests, a folklore and pop concert, a culinary contest, folk dances, an evening ski "fire" show and Freestyle demonstrations.