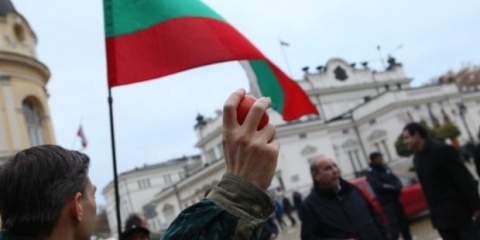 Disgruntled Bulgarians are organizing themselves on social networks to stage on Wednesday, December 12, a repeat of the "Tomato Revolution."

The rally is called for 4:30 pm, this time in front of the central Court building in the capital Sofia. It is organized by a group of citizens, who took part in a "tomato" protest in front of the building of the Parliament on November 24.

They have submitted a request with the City Hall to have a permit to hold the demonstration, listing the goal as a civil protest against corruption and the meddling of the executive power in the justice system and voicing demands for judicial reform under the recommendations of the last EC monitoring report - a full overhaul of the Supreme Judicial Council, VSS, decentralization of the Prosecutor's Office, an effective Chief Prosecutor, and civil control on the judiciary.

One of the organizers has been summoned at the City Hall Tuesday and asked to sign a warning protocol, which he refused.

The demonstrators now say that this was an intimidation attempt, and pledge to approach the Prosecutor's Office on grounds the Meetings and Manifestations Act has been violated.

They also inform that the protesting Bulgarians will bring tomatoes, but will throw them only if their calls remain unheard.

The first "Tomato" protest took place Saturday, November 24, and was organized in support of Bulgarian dissident, poet and publicist, Nikolay Kolev Bosiya (The Barefooted), who was threatened with up to two years behind bars for throwing a tomato at the Parliament on November as an act of protest against the rampant corruption in the country.

He also specified the date (November 20) and the order of his "tomato assault," saying he would start from the Parliament at 10 am.

Kolev's threat did not go unnoticed and he was anticipated by some 40 police officers as he approached his first target. He was arrested after he threw one tomato.

He is to take part in the Wednesday rally and will be one of the speakers.