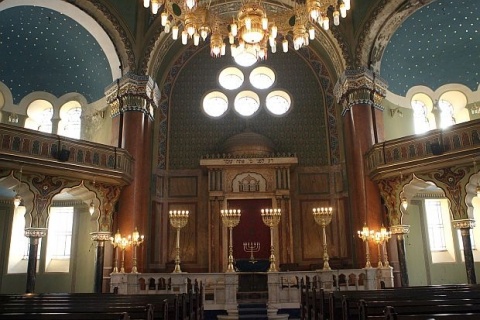 The first shamash candle of Hanukkah will be lit at Sofia's Central Synagogue Saturday evening. Photo by Sofia Photo Agency

Bulgaria's President Rosen Plevneliev is taking part Saturday in the celebration of Hanukkah by the Jewish community in Sofia.

Plevneliev was invited to light the first shamash candle of Hanukkah at Sofia's Central Synagogue marking the beginning of the eight-day Jewish Festival of Lights, which this year starts in the evening of December 8.

By tradition, the shamash is lit by a person respected by the Jewish community. After the service in the Synagogue, the special celebration is continuing with a Hanukkah Night at the Jerusalem Hall of the Jewish Culture Center in Sofia.

Hanukkah, also known as the Festival of Lights, is an eight-day Jewish holiday commemorating the rededication of the Holy Temple (the Second Temple) in Jerusalem at the time of the Maccabean Revolt of the 2nd century BCE. Hanukkah is observed for eight nights and days, starting on the 25th day of Kislev according to the Hebrew calendar, which may occur at any time from late November to late December in the Gregorian calendar.

The festival is observed by the kindling of the lights of a unique candelabrum, the nine-branched Menorah or Hanukiah, one additional light on each night of the holiday, progressing to eight on the final night. The typical Menorah consists of eight branches with an additional raised branch. The extra light is called a shamash  and is given a distinct location, usually above or below the rest. The purpose of the shamash is to have a light available for use, as using the Hanukkah lights themselves is forbidden