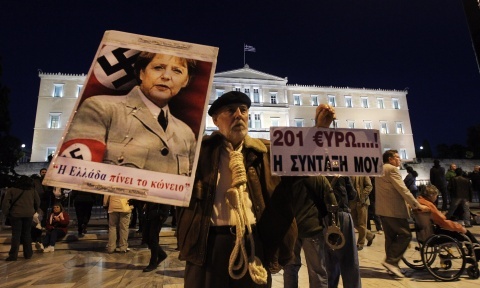 An old man stands in front of the Greek parliament building holding a poster that shows German Chancellor Angela Merkel as a Nazi and a placard that reads “201 Euros is my pension“, Athens, Greece, 11 November 2012. EPA/BGNES EPA/BGNES

Greece's operation to buy back part of its huge debt at reduced prices to access additional EU-IMF financial aid has met the target of EUR 30 B, according to reports.

According to Greek financial daily Naftemboriki, cited by international media, foreign debt-holders had offered to sell sovereign bonds worth around EUR 15 B while Greek banks had contributed another EUR 15 B by the required deadline on Friday.

The Kathimerini daily added that Greece's four main banks -- National Bank, Eurobank, Alpha and Piraeus - had contributed state bonds worth around EUR 11.5 B.

Greece's state management agency is expected to announce initial results from the operation later on Saturday.

Greece began the buyback on Monday in a bid to cut the national debt by around EUR 20 B, inviting eligible holders to turn in sovereign bonds for 32.2 to 40.1% of their face value.

Those who participated were to receive six-month bills issued by the European Union's EFSF rescue fund with up to EUR 10 B available from the fund for the operation.

With the value of Greek bonds having plunged in recent years, this money was considered sufficient to buy back debt worth EUR 30 B.

About 20 different series of Greek sovereign bonds held by private creditors with a face value of EUR 62.3 B were eligible for the buyback.

The operation is tied to the release of EUR 43.7 B in rescue loans from the European Union and the International Monetary Fund.