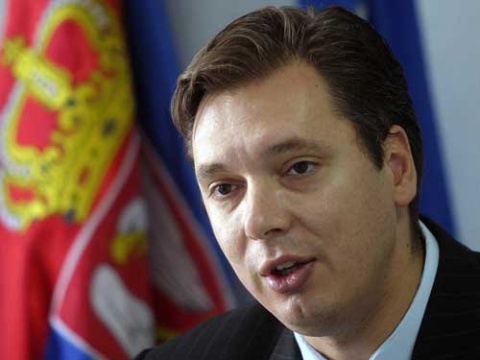 Serbia's Defense Minister Aleksandar Vucic has asked US Defense Secretary Leon Panetta for a continuation of the American military assistance to Bulgaria's neighbor regardless of the fact the two men served in opposing camps during the 1999 NATO-Serbia war over Kosovo.

Vucic is also said to have asked his American counterpart to maintain a troop presence in Kosovo, international news agencies report citing unnamed officials from the US government.

The Serbian Defense Minister, who served as information minister under former Yugoslav dictator Slobodan Milosevic, has requested from Panetta that the US continue to provide USD 8 M in annual military assistance to Serbia during their meeting at the Pentagon on Friday.

Both Vucic and Panetta, who served as chief-of-staff under former US president Bill Clinton who ordered bombing raids against Serbia in 1999 over Kosovo, are said to have marveled at how their conversation would have been impossible not long ago.

Vucic told Panetta that not in his "wildest dreams would have I imagined that I would be sitting here across from the US secretary of defense."

For his part, Panetta said that "I wouldn't have thought as chief of staff to Bill Clinton that I would be sitting across from you saying Serbia could be a force for peace in the region," according to the account provided by US officials.

The Pentagon said in a statement that the two defense chiefs "exchanged ideas on ways to deepen cooperation between the US and Serbia" and that Panetta thanked Belgrade for sending peacekeeping troops for UN missions in Cyprus and Lebanon.

Vucic said Serbia appreciates the training, officer exchanges and other defense cooperation provided by Washington since 2006.

Serbia belongs to NATO's "Partnership for Peace" program which provides for a range of cooperation on defense and security issues.

The NATO alliance waged a 78-day air war against Serbia to end Belgrade's repression of the then province of Kosovo, whose independence has been recognized by 90 states, including the United States. Thirteen years since NATO's air strikes, Serbia still rejects Kosovo's unilateral 2008 proclamation of independence.

International media note that as information minister in 1998, Vucic presided over legislation that outlawed the broadcast of Serbian-language services from foreign news services and introduced steep fines for independent reporters who spoke against the government.