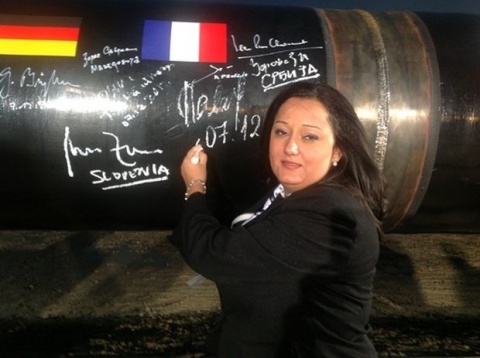 Bulgaria's Regional Development Minister Lilyana Pavlova, who was the official representative of the Bulgarian government to Friday's launch of the construction of the South Stream gas transit pipeline, has taken part in the ceremony in Anapa, Russia, by signing the pipe.

Instead of breaking the ground for the future pipeline, the representatives of the European countries involved in the South Stream project – Bulgaria, Italy, France, Germany, Austria, Slovenia, Turkey, Greece, Serbia, Hungary, Macedonia, and Croatia – all left their signatures on the pipe, reported the press service of Bulgaria's Regional Development Ministry.

In addition to the national representatives, the ceremony at which Russian President Vladimir Putin gave the start of South Stream, was also attended by the CEOs of the corporate participants in the project – Alexei Miller, CEO of Gazprom; Paolo Scaroni, CEO of ENI, Henri Proglio, CEO of EDF, and Marcel Kramer, CEO of South Stream Transport AG, the report said.

The South Stream pipeline is intended to transport up to 63 billion cubic meters of natural gas to central and southern Europe, diversifying Russian gas routes away from transit countries such as Ukraine. Construction will start in December 2012, and not 2013 as previously planned.

The pipes will go from Russia to Bulgaria via the Black Sea; in Bulgaria it will split in two – with the northern leg going through Serbia, Croatia, Hungary, and Slovenia to Austria and Northern Italy, and the southern leg going through Greece to Southern Italy. Recent reports have indicated, however, that Russian energy giant Gazprom may give up on the construction of the offshore section of the South Stream gas pipeline to Austria.

The Black Sea underwater section of South Stream between Russia and Bulgaria will be 900 km long, and will be constructed at a maximum depth of 2 km.

In order to service the supplies for South Stream, Russia will expand its own gas transit network by building additional 2 446 km of pipelines with 10 compressor stations with a total capacity of 1473 MW, a project to be called "South Corridor" and to be completed in two stages by 2019.

The pipeline's core shareholders include Gazprom with 50%, Italy's Eni with 20% and Germany's Wintershall Holding and France's EDF with 15% each.

Bulgaria recently committed itself to speeding up the construction of the Russian-sponsored pipeline on its territory, since on January 1, 2013, the EU is introducing new requirements for the access to energy networks.