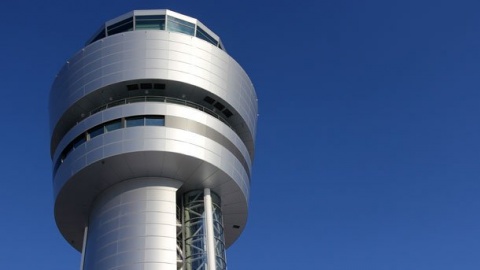 The new air traffic control tower is located at Terminal 2. Photo by BGNES

The new air traffic control tower at Sofia airport was put into operation right after its official inauguration on Wednesday.

The new air traffic control tower is located at Terminal 2 and will be taking over the duties of the airport older tower at Terminal 1.

It also has the potential to serve the incoming and departing flights from one more runway, which paves the way for the future development and expansion of the airport, the transport minister Moskovski explained.

The new tower is 50m high and according to plans it should be kept functional for the next 40 years.

The cost of its construction totaled BGN 15 M.

An Advanced-Surface Movement Guidance and Control System, A-SMGCS, is about to be implemented in the short term to ensure the safe and fast airline traffic at Sofia airport, regardless of weather conditions.

Construction company Glavbolgarstroy secured a contract from the Bulgarian Air Traffic Services Authority (BULATSA) for the preliminary design and construction of a new control tower at Sofia Airport in the summer last year.