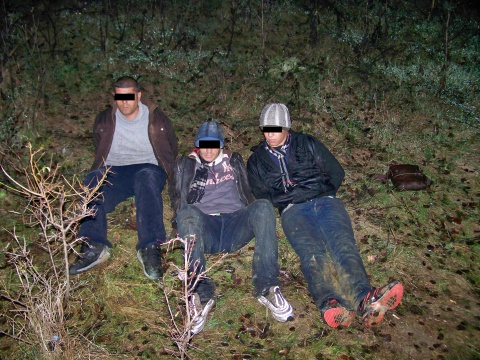 Three men from Algeria, Libya, and Syria, who had escaped from their refugee accommodation facility in Bulgaria were arrested before crossing the border with Serbia. Photo by Interior Ministry

Two men from Algeria were detained Wednesday by the border guards near Bregovo, Vidin District, in Northwestern Bulgaria as they were trying to cross the border on foot into Serbia, the Border Police announced Thursday.

The two men were found to have left the facility for temporary accommodation of foreigners in Busmantsi near Sofia; they had filed requests for asylum in Bulgaria, and were later transferred to a refugee center in the Ovcha Kupel quarter in Sofia, which has a more "liberal" policy so they managed to walk out free regardless of lacking legal status in the country.

Later on Wednesday, the border police in Bregovo arrested three other illegal immigrants from Algeria, Syria, and Libya, who were trying to cross into Serbia after getting off a cab about 1 km away from the border. They were detained shortly before midnight.

The three men were found to have escaped from refugee facility in the village of Pastrogor near Svilengrad, on the Bulgarian-Turkish border, which is also said to have a "liberal" regime; all three of them had the status of asylum seekers but without any political asylum granted yet.

All five detainees confessed to the border police that they were trying to reach Western Europe.

In an unrelated case, the Bulgarian border guards arrested 20 nationals of Ivory Coast (Cote d'Ivoire) at the Bulgarian-Turkish border.