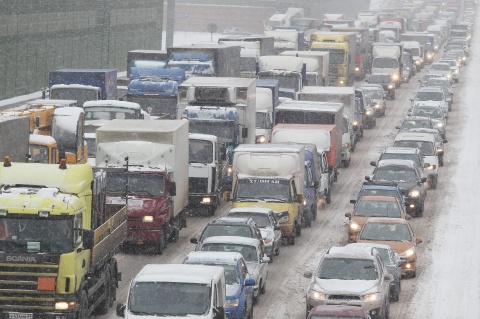 Heavy snowfall caused an almost 200-km traffic jam on a highway between Moscow and St. Petersburg. Photo by EPA/BGNES

The Russian government has launched an investigation into the causes of a shocking 190-km (118-mile) traffic jam.

The horror traffic jam paralyzed a key Russian highway over the weekend, international media reported. The traffic jam was caused by a heavy snowfall late on Friday and was further complicated when the authorities manoeuvred a snow plough through the vehicles to clear the road.

According to the Russian Interior Ministry, the traffic jam extended to 190 km and involved more than 4,000 trucks. Thousands of drivers waited for hours without moving in their trucks Sunday in temperatures of minus 5 degrees Celsius (23 degrees Fahrenheit).

Russian officials said that traffic on the M-10 highway north of Moscow had been moving normally again since the early hours of Monday but acknowledged more needed to be done to prevent a repeat of the problems.

The Russian traffic police said Monday that average speeds had now returned to the normal 80 kilometres (49 miles) an hour after the vehicles started moving at 2:30 am (1030 GMT Sunday).

The M-10 Highway - known as the "Russia" highway - connects Moscow and Saint Petersburg.

"I ask that conclusions are made and the highway is properly prepared as winter has only just started. What happened is a good lesson for all the services," Russia's Emergency Situations Minister Vladimir Puchkov said at a government meeting.

Officials claimed that they had been given enough provisions but Puchkov admitted this had not always been the case.

"We had problems from the point of view of the highway services and ensuring that drivers had food, water and medication," he said, adding, "Systems of keeping the drivers informed were not ready."