3 Bulgarian Fishermen Rescued after Night on Cliff off Burgas Coast 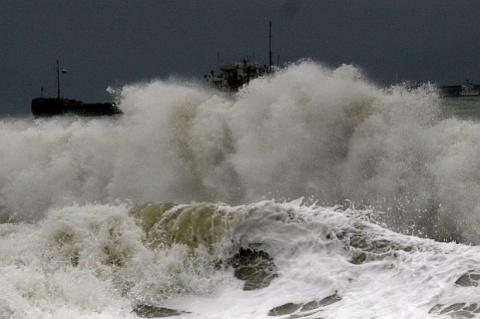 Three Bulgarian fishermen have been rescued from a cliff off the Bulgarian Black Sea coast of Burgas after spending the nbight in freezing temperatures. Photo by dariknews.bg

Two of three fishermen, who were rescued from a cliff off the Bulgarian Black Sea coast of Burgas, have been released from hospital in a stable condition.

Konstantin Grebenarov, District Governor of Burgas, as cited by Darik radio, informed that the men had gone fishing near Sinemorets, when late on Sunday strong winds emerged which crushed the boat into the cliffs.

The fishermen managed to reach a small cliff in the bay as the storm strengthened.

Little before midnight, one of the men called emergency number 112.

Using a lifebelt and a rope, Border Police officers managed to rescue one of the stranded fishermen, a man aged 60 from Tsarevo.

Due to the severe weather conditions, the boat could not go nearer to get the other two men.

Around 6 a.m. on Monday, the Military Medical Academy in Varna was asked to provide a helicopter, which eventually proved unnecessary, because the rough weather had subsided and a rescue boat managed to approach the cliff to get the two men.

The rescue operation was conducted by a team of Bulgaria's Border Police and the Maritime Administration Executive Agency.

The two men, who spent the night on a cliff in the sea in freezing temperatures, were immediately taken to the hospital in Tsarevo by ambulance, from where were subsequently released at their insistence in a stable condition.