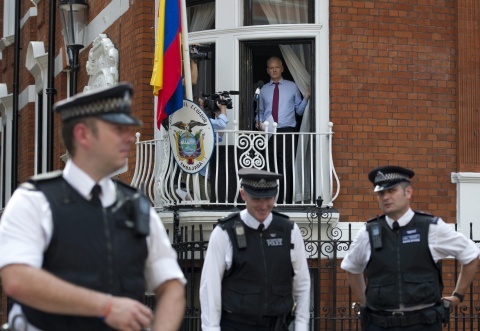 Wikileaks founder Julian Assange delivers a statement on the balcony inside the Ecuador Embassy where he has sought asylum in London, Britain, 19 August 2012. EPA/BGNES

Prominent whistleblower Julian Assange has a chronic lung infection and his condition could get worse at any moment, Ecuador's Ambassador to the UK has warned.

Ambassador Ana Alban said the Wikileaks founder, who is fighting UK efforts to send him to Sweden, was suffering from living in a confined space.

"Not only does the embassy have few windows but the city is also dark at this time - we have very little daylight in London," Alban has pointed out, as cited by BBC.

"He is exposed to any health consequences from this lack of sunlight and lack of fresh air."

Ecuador previously sought assurances Assange would not be arrested if hospitalised, BBC has reminded.

The UK said then it would not prevent "any medical care that he requires".

Assange sought asylum in Ecuador after failing to appeal against orders by British courts that he be extradited to Sweden for questioning over sexual assault allegations.

Assange denies the claims and fears his extradition will lead to his transportation to the US where he will be prosecuted for publishing a cache of confidential US diplomatic cables and documents on his website.